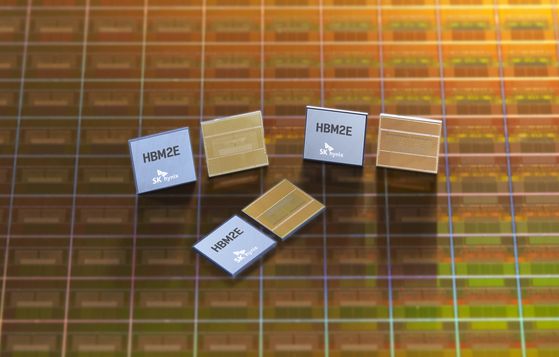 
SK hynix has started mass production of HBM2E chips, a DRAM chip so fast it says it can transmit 124 high-definition movies in a second.

The company’s HBM2E chip, which SK hynix says is the fastest in the world, can process data up to 460 gigabytes per second. Compared to the previous HBM2, its capacity was more than doubled to save up to 16 gigabytes of data by connecting eight 16-gigabit DRAM chips using “through silicon via [TSV]” technology.

TSV is a packaging technology that stacks multiple DRAM chips on top of one another, each of which have thousands of microscopic holes through which electronic current and data can flow between the layers. Chips produced this way are called “high-bandwidth memory.”

The HBM2E chip is the third product of the lineup since SK hynix released the world’s first HBM DRAM in 2013. The company is still one of the very few chip makers that can produce HBM semiconductors, along with Samsung Electronics. The start of the chip's full-scale mass production comes 10 months after the company first announced its development in August 2019.

“HBM2E boasts high-speed, high-capacity, and low-power characteristics” SK said in a statement, adding that such features will be optimal for the chip to be used in various fields that require high-level computing performance like deep learning and artificial intelligence.

“SK hynix has been in the forefront of technology innovation that contributes to human civilization with achievements including the world’s first development of HBM products,” said Oh Jong-hoon, the company’s executive vice president and chief marketing officer.

“With the full-scale mass production of HBM2E, we will continue to strengthen our presence in the premium memory market and lead the fourth industrial revolution.”