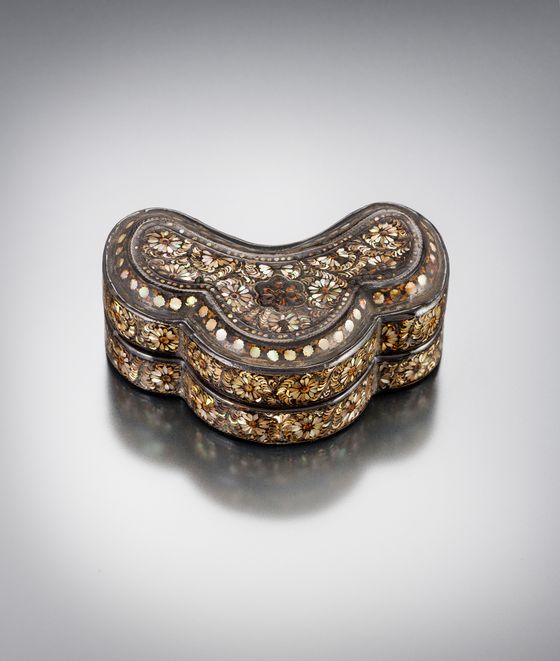 A mother-of-pearl lacquerware of Goryeo Dynasty (918-1392) has recently returned to Korea from Japan. [CULTURAL HERITAGE ADMINISTRATION]


A piece of mother-of-pearl lacquerware of the Goryeo Dynasty (918-1392), also known as najeonchilgi in Korean, finally returned to Korea from Japan.

After realizing it was in the hands of a private collector in Japan in 2018, officials of the Overseas Korean Cultural Heritage Foundation flew to the country to check the condition of the relic and attempt to negotiate a deal for its return.

After months of trying, the officials managed to persuade the Japanese collector of the Goryeo najeonchilgi to sell it to the Korean government in October 2019, and the transaction was finally made in December.

A handful of experts and researchers flew over to carefully wrap and box the centuries-old box — measuring just 10 centimeters (0.3 feet) long and weighing around 50 grams (1.8 ounces) — and bring it back to Korea in January.

After months of research and scrutiny, the Cultural Heritage Administration (CHA), an affiliate of the Overseas Korean Cultural Heritage Foundation, finally revealed the relic before local media for the first time since its return on July 1 at the Royal Palace Museum of Korea in central Seoul.

To ensure that reporters didn't get too close to the 800-year-old artifact, CHA officials made sure they barricaded the relic.

But what's all the fuss about?

Mother-of-pearl lacquerware is commonly seen on the the streets of traditional markets here.

But according to the Overseas Korean Cultural Heritage Foundation, only 22 pieces of mother-of-pearl inlaid lacquerware that were created in Goryeo remain today and of them, only 15 are intact.

In addition, only three intact pieces of Goryeo najeonchilgi are in Korea, including the recently returned box, while the rest are scattered across the globe, despite being valuable Korean treasures.

According to the Overseas Cultural Heritage Foundation, most are collected by major museums in the United States and Japan. The two intact najeonchilgi housed in the National Museum of Korea are the Najeon Gyeongham, a lacquered box decorated with mother-of-pearl and the Najeon Buddhist stick.

“It was very important for the Overseas Korean Cultural Heritage Foundation to quickly act and collaborate with the Cultural Heritage Administration to get in touch with the private Japanese collector and bring back the Goryeo najeonchilgi,” said Chung Jae-suk, chief of the CHA, “It is really difficult to bring such pieces back once its ownership is handed over to a government body or state-run museums.”

Choi Eung-chon, the chairman of the Overseas Korean Cultural Heritage Foundation stressed the reason that many other cultural heritages of Korea cannot come back to their home country. “It makes it difficult for us to negotiate and bring back our treasures once they have been handed over to a foreign authority,” said Choi.

Due to the fine inlay work, local experts speculate that these were popular trade items in the late Goryeo to early Joseon Dynasty.

Goryeo lacquerware with mother-of-pearl inlay was highly praised at the time. Song Chinese Imperial envoy Xu Jing who visited Goryeo, wrote, “Illustrated Account of the Xuanhe Embassy to Goryeo” in 1123 — the first year of Goryeo King Injong’s reign. In it, he described najoenchilgi as “exquisite and precious,” and hailed the “elaborate skills” of the artisans as “indeed valuable.”

The box was originally part of a set of nested boxes and according to the CHA, only three boxes of the same shape have survived. One is currently in a collection at the New York Metropolitan Museum and the other at a shrine in Kyoto.

The returned box used abalone and tortoise shells for jagae — a native Korean term referring to the craft of inlaying mother-of-pearl decorations. According to Kim Dong-hyun, a researcher at the Overseas Korean Cultural Heritage Foundation, the returned box is regarded as a “masterpiece that reflects the characteristic refined beauty of Goryeo lacquerware inlaid with mother-of-pearl designs.”

“Chrysanthemum and scroll design are used as the main motif on the lid and the body of the box,” said Kim. “The mother-of-pearl ornaments are densely arranged and they are cut out in pieces that are too small to be picked up by the fingertips. It’s amazing how Goryeo artisans managed to be so agile and sophisticated without any modern technologies to help them.”

Experts praise the elaborate workmanship of creating a chrysanthemum at the center of the lid, using tortoiseshell that has been ground so flat that it is transparent enough to reflect the colors painted on the reverse side — a decoration technique that’s particularly difficult and distinctive in Goryeo najeonchilgi.

The National Research Institute of Cultural Heritage said it conducted a three-month non-destructive analysis of the lacquered box as soon as it arrived in Korea to scientifically analyze the production techniques and materials used, making sure it was from the Goryeo dynasty.

“The returned box was made using techniques and materials common in the production of Goryeo mother-of-pearl inlaid lacquerware,” said Park Jong-seok from the institute. “The frame of the box was made of wood, which was then coated with cloth and lacquered. Cuts were made at regular intervals inside the wooden frame to allow a curved body. The body was created by adding side walls to the base and top walls.”

The returned Goryeo najeonchilgi will be transferred to the National Museum of Korea and will be exhibited to the public starting December in a special exhibition entitled “Ancient Colors: Lacquer.”

“Taking the opportunity of this successful return, the Cultural Heritage Administration will continue making efforts to discover and retrieve important cultural properties scattered across the globe and build close relations with related institutions for the efficient implementation of projects connected to the retrieval, research, exhibition and promotion of cultural properties,” said Chung. “In doing so, it will work to offer further opportunities for Koreans to experience precious Korean cultural heritage.”