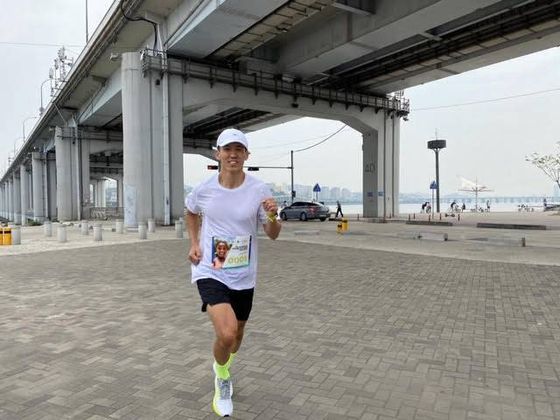 Singer Sean donated 55 million won ($46,000) collected through a virtual marathon to support children around the world during the Covid-19 outbreak, his agency, YG Entertainment, said on Monday.

Sean held "Virtual Compassion Run," a virtual marathon project with Compassion Korea in which runners could choose a course length from 3 kilometers (1.9 miles) to 21 kilometers. The registration fee was 50,000 won, and with a total of 1,093 people registering, the event raised some 55 million won.

The project was in line with the untact (a portmanteau of the prefix “un” and contact, meaning no contact) trend which has arisen due to the social distancing campaign.

The event was originally scheduled to go ahead at the end of last month, but the period was extended to July 5 as more signed up than expected. Each participant was presented with colorful socks from Socks Up, a Starbucks tumbler, and a souvenir medal.

"I would like to thank everyone who participated in the event to support children in need during the tough times these days." Sean said.

Compassion Korea is a Christian humanitarian aid organization currently assisting some 2 million children in 25 countries. Sean and his wife, actor Jung Hye-young, are goodwill ambassadors for the organization and sponsor over 400 children.