Kakao M reveals plans for W400B of original content from 2023

Kakao M reveals plans for W400B of original content from 2023 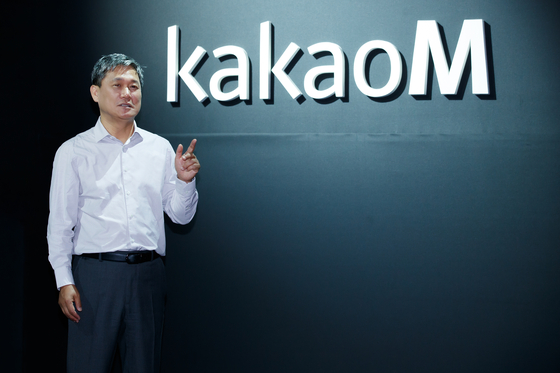 Kim Sung-soo, CEO of entertainment company Kakao M, introduces his visions for the company and the future of the content industry at Blue Square in Hannam-dong, central Seoul, on Tuesday. [KAKAO M]


Kakao M, one of the largest entertainment companies in Korea and a leader in the music, film and digital content industry, is aiming to produce and release 400 billion won ($331.8 million) worth of original content annually from 2023.

In the company’s first official press event since its establishment in 2018, CEO Kim Sung-soo personally came up to the stage to introduce the vision for the future of Kakao M, at Blue Square in Hannam-dong, central Seoul, on Tuesday.

“To create good content, you need to gather talented people and create an infrastructure that can support them,” said Kim. “We plan to pursue more mergers and acquisitions [M&As] with more agencies later on.”

Kim dismissed questions that likened the company’s avid pursuance of M&A to monopolizing the content industry and said he saw it as part of the process of recruiting top talent for one overarching goal of progress.

“Right now, Korea’s infrastructure [on content] is too fragmented,” Kim pointed out. “I want to make a fair environment which can protect and fully support creators, which only then can lead to a good content.

“Although on one side it can be seen as monopolization, on the other hand this is progress,” Kim continued. “A majority of local production companies and agencies are small-scale, and in order to heighten [the quality] to a higher level, we need investment and accumulated know-how.”

He emphasized the need to build a strengthening systemic structure that is needed to develop content, which can’t be drawn up through monetary input alone.

“One good way to look at it is integration of those with aspirations who wish to advance the content industry, ultimately working toward one unifying goal of progress,” Lee explained. “In the United States, this is called packaging — in which a studio interferes in the entire content-making progress from scriptwriting, casting and production. This is the reference of packaging service that we hope to achieve [in the future].”

“We think that there’s a lot of potential with MBC, especially for their variety shows,” Kim said. “We [MBC and Kakao M] plan to create spin-offs from popular series such as ‘I Live Alone’ and ‘Hangout With Yoo.’”

A win for donation culture