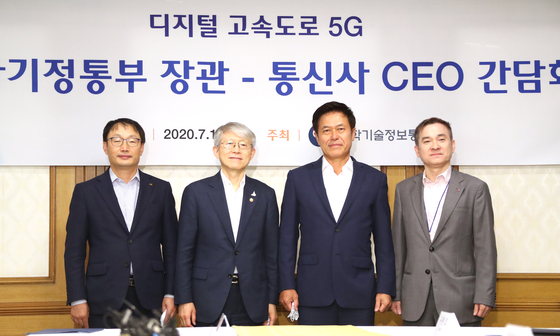 Korea’s four telecommunication companies will spend up to 25.7 trillion won ($21.4 billion) on the country’s 5G infrastructure through 2022.


The investment is aimed at establishing a so-called data highway that operates on 5G networks, according to the Ministry of Science and ICT.

This concept is part of the government’s Digital New Deal announced earlier this week. One initiative under that blueprint is to establish a “data dam” where big data created by companies and state offices is gathered at one place and analyzed to be used to spur new business opportunities.

As a passage transmitting this massive amount of data, a “data highway” that ensures fast and stable connection would be key.

Theoretically, 5G offers speed and bandwidth that previous generations of technology couldn’t. But customer feedback on the stability of 5G connections in the country has not been good after local mobile carriers launched services last year. One-fifth of 5G-related user complaints collected since April 2019 were about poor connection quality, according to the Korea Communications Commission.

“Three mobile carriers and SK Broadband will invest 24.5 to 25.7 trillion won in establishing infrastructure for 5G telecommunications network,” said the Ministry of Science and ICT in a Wednesday statement, adding they had “agreed to push for aggressive investments as a way to overcome the economic recession caused by the Covid-19 pandemic.”


On Wednesday, Science Minister Choi Ki-young got together with CEOs of Korea’s three mobile carriers to discuss what they could work on to realize the Digital New Deal.

The ultimate goal is to install 5G equipment in the country’s 85 cities by June 2022. Currently, the 5G infrastructure in the country is concentrated in Korea’s six largest cities and on the highways that connect them. Even inside these metropolitan areas, some 5G subscribers have complained that connections are lost indoors or underground.

Breaking down that three-year plan, efforts this year will be focused on covering blind spots in the six most populated cities, like large retailers, universities, libraries, underground stores and subways and highways. In 2021, that initiative will be extended to the most populated neighborhoods of the country’s 85 cities. During the final year of the project, 5G coverage will reach small local merchants and rural areas.


In return, the government offered companies tax cuts for investments made or for registering base stations.


“The socioeconomic effect caused by Covid-19 is immense, and without finding an effective solution, this will leave long-term scars,” said Choi. “In a time of fundamental change in the economy and our way of life, I believe cooperation between the public and private sectors can work as a basic foundation in this search for a new solution.”