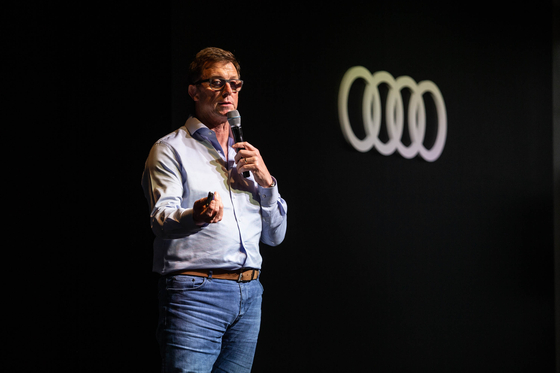 Jeff Mannering, executive director of Audi Korea, speaks to the press at a two-day media event in Hongcheon, Gangwon, on Monday. [AUDI KOREA]


HONGCHEON, Gangwon - Jeff Mannering, executive director of Audi Korea, said the brand will launch more eco-friendly vehicles in Korea in the future, aiming to have nearly 40 percent of its sales here dedicated to electric vehicles (EV) including hybrid and plug-in hybrid models by 2030.

At the moment, the e-tron SUV, which launched in Korea earlier this month, is the only eco-friendly model it sells here.

The plan is in line with the German headquarters’ EV road map to launch more than 30 electric models by 2025, constituting 40 percent of its global sales.

Mannering sees an opportunity in Korea’s EV market as the country has relatively good infrastructure in terms of charging stations, a decisive factor in lowering the barrier to purchasing an EV.

“Now is the right time to launch an electric vehicle in Korea,” Mannering said at a dining event in Hongcheon, Gangwon, on Monday, where the brand held a two-day e-tron test drive program for reporters.

“Thirty kilometers [18.6 miles] is all it takes in Seoul from one charger to another, whereas in the United States, they are about 148 kilometers apart from each other, and for Europe, 100 kilometers,” he said.

Audi’s e-tron came relatively late to Korea. The German luxury brand had already launched the model in Europe and the United States last year and even added a Sportback variation to the lineup.

Mannering admitted to being late to the EV competition, but said when the brand wants to do something, it wants to do it right.

And in that sense, bringing the e-tron to Korea now means the infrastructure is stabilized and the number of players in the game is rising.

“Adding value” is crucial to survive in such a competitive market, especially where domestic players are no longer considered just a value-for-money option.

“The design for domestic carmakers is getting to a cutting-edge level,” he said, implying Hyundai Motor and Kia Motors. “So you have to offer a different experience to the customers to make a difference. How we communicate and so on.”

Audi’s charging-on-demand service is part of that effort to make a difference. Under the service, a nearby dealer picks up your car at a reserved time, takes it away, charges it and brings it back.

“It adds value to the EVs by taking away the fear of buying an electric car,” Mannering said.

Tesla is unrivaled in EV sales globally, and Korea is no exception, even though it started selling its select number of models here just three years ago. Tesla was ranked at No. 4 in Korea’s import car market in the first six months of this year with just three models.

It is the biggest threat to Audi Korea, as well, in terms of EV sales.

“Tesla sold 7,000 [cars] in Korea in the first half, and that is pretty amazing,” Mannering said.