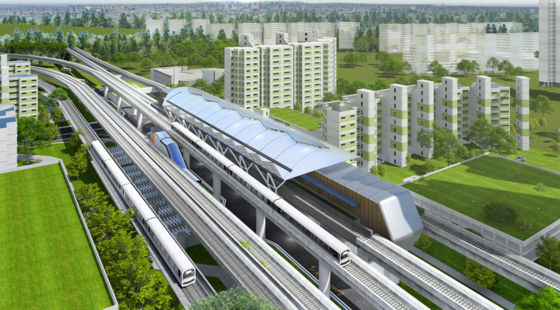 An aerial view of the railway construction project Daewoo E&C will design and build in Jurong, Singapore. [DAEWOO E&C]

The company announced on Monday it will design and build Jurong Region Line J109 in Jurong, located in western Singapore, with local construction firm Yongnam E&C. It will build a total of 3.6 kilometers (2.2 miles) of the line.

The construction will be part of the Mass Rapid Transit line that connects the North South line, East West line and the key areas of Jurong.

Daewoo E&C said it proposed safe and efficient methods of construction to obtain the order, considering the difficulties of the project’s construction conditions.

Since Daewoo E&C entered Singapore in 1983, it has worked on eight projects, including the Alexandra View Condominium and One Balmoral Condominium.

A spokesperson for Daewoo E&C said the company “plans to make Singapore a representative strategic base in Southeast Asia followed by Vietnam.”