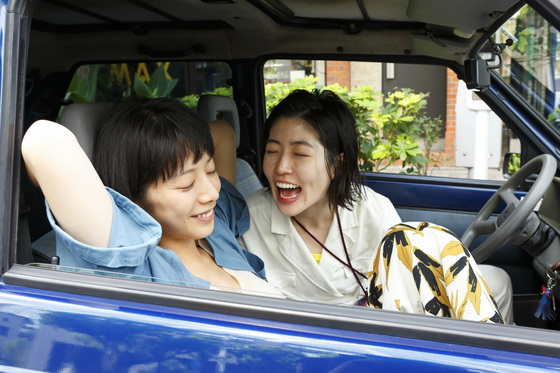 
Ever felt like you want to drop everything and disappear?

In Japanese film “Blue Hour,” this is what Sunada (played by Japanese actor Kaho), a successful but tired television commercial director, feels as she arrives home drunk one night. After being scolded by her mother for never visiting and being spurred by her longtime childhood friend Kiyoura (played by actor Shim Eun-kyung), Sunada decides to visit her rural hometown in Ibaraki.

On the surface, Kiyoura appears to be a vivacious, cheerful character — familiar territory for Shim, who has played similar roles before, like in “Miss Granny” (2014) and “The Princess and the Matchmaker” (2018). But this time the role is a little different.

“Kiyoura had a different layer than other bright characters that I’ve done,” Shim said in an online press event that took place at CGV’s Yongsan branch in central Seoul on Monday. “I felt that there was room for me to contribute in creating this character. Kiyoura has a uniqueness that’s similar to the characters from Disney's animated films. She felt like someone who could really exist, but also possessed a fantasy-like side.”

Director Yuko Hakota, who also participated in the event, emphasized that Shim’s humor was a critical factor in casting her for the role.

“When I first met Shim, I thought she was shy at first,” Hakota said. “But as I heard how she interpreted the script and her thoughts, she sounded really mature [for her age] and she’d exactly grasped what I wanted to tell through the story. [As I got to know her] she had this humorous side. I knew I had to bring her to the film, and my intuition wasn’t wrong.”

Shim quickly discovered that her character was much more complex than she’d originally thought.

“Kiyoura is described as this unfalteringly bright character,” Shim said. “But as the shooting went on, I somehow felt sad and lonely. I think this is because Kiyoura sympathized with what Sunada felt. That’s when I realized that this character wasn’t just effortlessly cheerful — she had her own emotions and thoughts... All in all, I think what’s crucial [in acting] is the character’s sincerity, and in that sense, Kiyoura was no exception.”

The reason why Shim felt that Kiyoura wasn’t simply a lighthearted character lies in the film’s message.

“The film title, ‘Blue Hour’ refers to the time of the day when the sky turns deep-blue, usually very early in the morning or late in the evening before nighttime arrives,” Hakota said. “I think all of us have this experience when we wake up from a deep slumber and are confused about what time it is. This story is about Sunada’s blue hour, and she has to make a choice.”

When asked to compare how it was different featuring in a Japanese film compared to local ones, Shim answered that every film has individuality regardless of nationality.

“Rather than because it’s a Japanese film, I think the film offers a particular sensitivity that is the work of director Hakota and our staff,” the actor replied. “The attraction of the story is Hakota’s unique perspective and the set of emotions she brings to the story that are added on by the dreamlike yet realistic quality of the scenes. All of these factors were brought about together to create this delicate piece of work and color that only ‘Blue Hour’ possesses.”