Foreigners arriving in Korea for short-term stays may have to pay their own medical fees in the near future if they become infected with the coronavirus.

Local health officials floated the possibility Tuesday during a media briefing, saying the time has come for “some change” to be reviewed in Korea’s Covid-19 treatment system, which currently covers all hospital fees for everyone in the country who tests positive, regardless of their nationality or purpose of stay.

Government statistics show that hospital fees for Covid-19 infections have cost 3 million to 70 million won ($2,500 to $58,450) per patient, depending on their conditions, underlying illnesses and the number of days spent in a medical care facility.

The National Health Insurance Service normally pays about 80 percent of each Covid-19 patient’s hospital bill. The rest is covered through central and local government coffers.

Health officials Tuesday did not reveal exactly how many foreigners who arrived in Korea for temporary stays have been treated for the coronavirus so far, but suggested the number and the cost of their treatments were low.

Nonetheless, Yoon Tae-ho, an official with the Korean central government’s Covid-19 command center, said the government should consider making some changes to the current treatment system for foreigners in “certain circumstances."

Sohn Young-rae, another health official, said possible side effects will have to be carefully weighed if the Korean government were to stop paying hospital fees for incoming foreigners, noting that seasonal workers arriving in Korea for temporary work won’t have enough money to cover the costs if they get infected with the coronavirus.

Sohn also said health authorities will have to review the proposal from multiple angles, including how it could affect Korea’s international stature and the diplomatic pros and cons from imposing what he termed “a discriminatory measure” against non-Koreans. 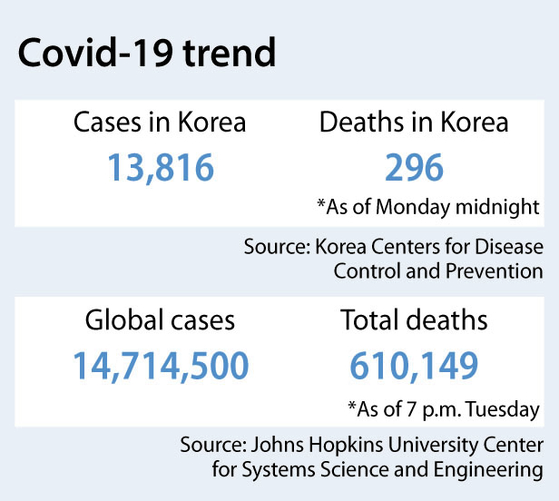 The announcement came as Korea's daily imported cases have been rising, frequently outnumbering those who have been infected locally.

A total of 45 people were newly diagnosed with the coronavirus Monday, the Korea Centers for Disease Control and Prevention (KCDC) said on Tuesday morning, 20 of whom were local cases and 25 of whom were infected from a foreign country.

Among the 20 local cases, 18 were in Seoul and one each was in Gyeonggi and Jeju Island.

Of the 25 imported cases, five were from the United States; four each from the Philippines and Kazakhstan; two from Japan; and one each from Brazil, Belarus, Britain, Zambia, Algeria, Iraq, India, Kuwait, Lebanon and Russia.

As of Monday at midnight, 296 people had died, the same as the previous day, while 12,643 people had been declared fully recovered, 71 more than the day before.

Most of the new cases in Seoul were from the cluster at the nursing facility for the elderly in Gangseo District, western Seoul, which was initially detected on Sunday.