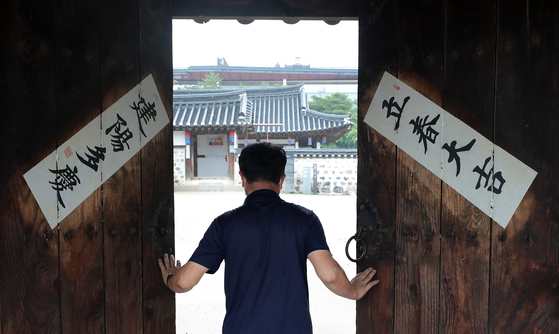 The door to a traditional Korean hanok house is opened Wednesday as the Namsangol Hanok Village in Jung District, central Seoul, welcomed visitors for the first time in weeks due to a surge in Covid-19 cases. Some 65 other cultural facilities in Seoul reopened the same day. [NEWS1]

At least 13 soldiers at a frontline Korean Army unit have tested positive for the coronavirus, defense officials said Wednesday, raising concerns of a growing cluster in the military.

Officials from the Ministry of National Defense and the Pocheon city government in Gyeonggi said all 13 soldiers are part of the same unit in Pocheon, just north of Seoul, and that the number of cases could grow given ongoing testing.

Two enlisted soldiers were the first to test positive among the 13. They visited a hospital near the unit Monday after feeling fevers and received positive results Tuesday.

All 220 soldiers in the unit were subsequently tested, and 11 people who had close contact with the two turned out positive Wednesday, bringing the total case load to 13.

Health and defense officials said they aren’t sure yet how the two draftees got infected. Both went on vacation in early June, and one briefly left the unit on July 10 for an outing, military officials said.

Ten military officers and 40 enlisted soldiers who had close contact with the patients have been quarantined in single rooms, while the rest have been placed under cohort isolation.

It’s the first time in over a month that a Korean soldier has been infected with the coronavirus, after four military officers at the Defense Security Support Command came down with the virus in early June.

Sixty-six Korean soldiers have been infected to date. 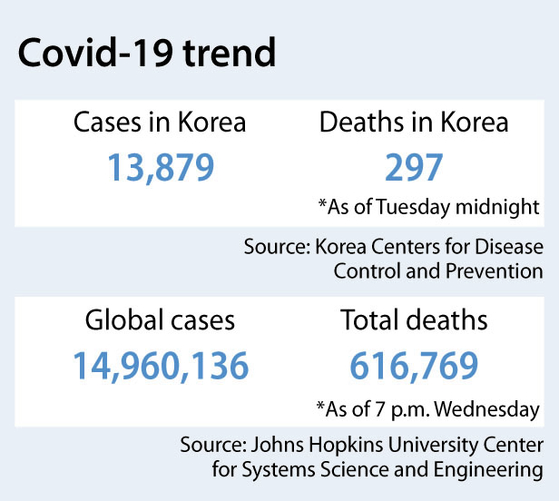 Across the country, the Korea Centers for Disease Control and Prevention (KCDC) said Wednesday morning that 63 people were newly diagnosed with the coronavirus Tuesday, 34 of whom contracted the virus in a foreign country: 11 in Uzbekistan, seven in the Philippines, five in the United States, four in Kazakhstan, two in Indonesia and one each in Turkey, Iraq, Qatar, Sri Lanka and Kuwait.

Twenty-nine people contracted the virus locally, 16 of whom live in Seoul, eight in Gyeonggi, four in Incheon and one in Gwangju.

As of Tuesday at midnight, 297 people had died, one more than the previous day, while 12,698 people had been declared fully recovered, up 55 from the day before.

Daily confirmed cases in Iraq have reached above 2,000 lately.

Prime Minister Chung Sye-kyun said Wednesday during a meeting of the Korean central government’s Covid-19 command center that the country has no other choice but to “live with Covid-19” for the time being, stressing it was important for everyone to follow hygiene guidelines and strike a “balance between preventive measures and everyday life.”

In Busan, quarantine officials said they detected yet another Covid-19 patient on a Russian vessel docked at Gamcheon Port on Wednesday, less than a week since 19 people from three Russian ships tested positive last Thursday after docking in Busan.