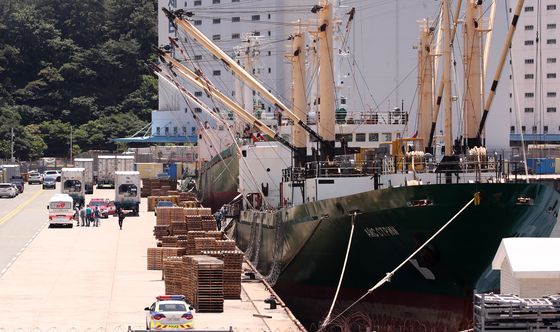 Crew members of the Russian-flagged Ice Stream disembark from the cargo ship Tuesday at Gamcheon Port in Busan to be transferred to Busan Medical Center for Covid-19 treatment. Out of 21 members, at least 16 tested positive Monday. [NEWS1]


At least 16 Russians on a cargo ship from Vladivostok that docked in Busan last weekend tested positive for the coronavirus, Korean health officials said Tuesday as the nation’s daily reported cases of Covid-19 jumped nearly threefold.

The Korea Centers for Disease Control and Prevention (KCDC) said Tuesday morning that 46 new infections were detected nationwide on Monday, nearly three times more than on Sunday when 17 cases were recorded, which was the lowest in a month.

Thirty of Monday’s cases came from abroad, including the 16 cases on the Russian ship. Among the rest, seven were from Kazakhstan, two each from Pakistan and African nations, and one each from Iraq, India and Germany, KCDC data showed.

Sixteen people were found to have been domestically infected: six in Seoul, four each in Daejeon and Gyeonggi, and one each in Daegu and Incheon.

Korea’s total case load now stands at 12,484. By Monday midnight, 281 people had died, up by one from the previous day, while 10,908 people had been declared fully recovered, up by 27 from the day before.

About 11.8 percent of the nation’s total Covid-19 patients contracted the virus overseas so far. Korean health officials have lately been warning about an uptick in such cases as foreign countries lift their lockdowns, and as manual laborers from abroad arrive in Korea in search of work in fisheries or agriculture.

The Russian vessel in Busan — Korea’s second most populous city of 3.4 million — amplified those fears when local authorities belatedly realized Monday that a crew of 21 Russians on a ship carrying frozen marine products had docked at Gamcheon Port the day before without informing Busan quarantine officials beforehand about crew members with symptoms of the virus .

Between the time the 3,933-ton Ice Stream docked at the port on Sunday at 8 a.m. and the time Busan quarantine officials learned about the virus risk the next day, some 124 local longshoremen workers at the port came into contact with the Russians.

They’re all either being tested for the coronavirus or have been put into quarantine. Korean health officials said Tuesday that one crew member of a 3,246-ton Russian cargo ship docked near the Ice Stream tested positive for the coronavirus that day.

The Ice Stream and the 3,246-ton vessel are known to be run by the same Russian shipping company. All infected patients have been transferred to nearby hospitals for treatment.

Busan quarantine officials said Tuesday they were planning to fine the Russian company for withholding information about the sick people on the Ice Stream, which under Korean law may lead to a fine of up to 5 million won ($4,100).

According to Busan officials, the Ice Stream left Vladivostok, Russia, on June 16 and arrived near waters of Busan three days later before docking at Gamcheon Port on Sunday morning. As it was nearing Busan on Saturday, the vessel informed Busan quarantine officials there were no crew members on board with symptoms of the coronavirus, and the ship was allowed to dock. 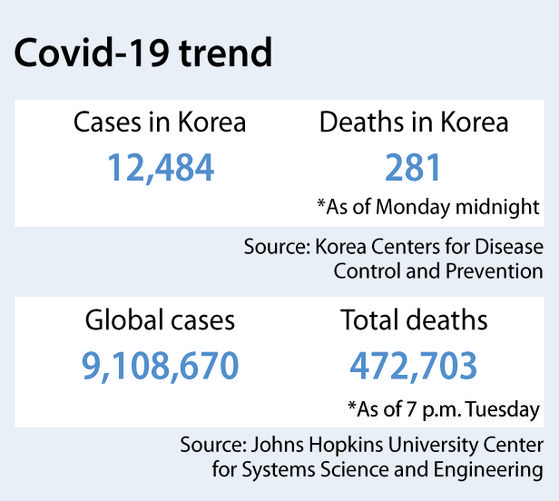 Had the Russian crew members planned to disembark from the ship and set foot on Korean soil, the vessel would have gone through a screening process by Busan quarantine officials checking for possible symptoms of the virus. The Ice Stream was able to avoid this procedure because its crew had no plans to get off the ship, Busan officials said.


But a day after the ship docked on Sunday, a shipping agent in Busan alerted the port’s quarantine authorities that the vessel’s captain was swapped shortly before leaving Vladivostok because he had tested positive for the coronavirus.

Busan quarantine officials boarded the Ice Stream on Monday at 11 a.m. and confirmed there were symptomatic crew members on board. Virus tests were administered to all 21 Russian crew members.

Epidemiologists said most Korean longshoremen who had contact with the Russian crew members didn’t wear face masks as they worked, raising the risk of transmission.

Among the latest local infections, most were linked to growing clusters from the Seoul metropolitan area and Daejeon.

In Dobong District, northern Seoul, two more cases were linked to the Sung Sim Cure Center for the elderly, bringing that hot spot to 45 cases.