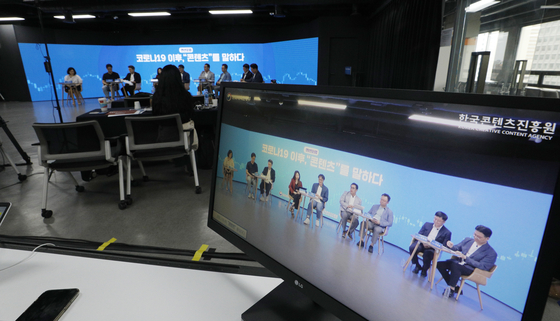 Experts sit for an online forum at the Gwanghwamun CKL Stage in central Seoul on July 21, on the subject of "Content after the Covid-19." [NEWS1] 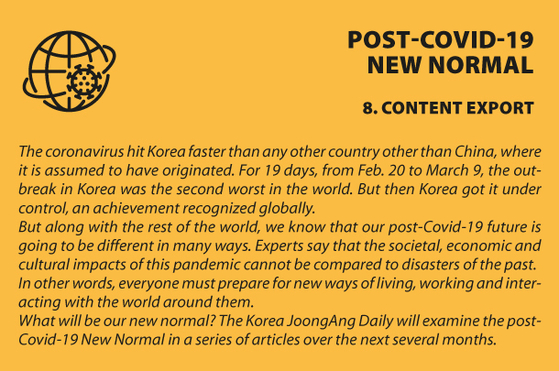 If anyone knows how to rebrand itself, it’s Korea.

Dozens of countries all over the world had enforced a travel advisory alert against those traveling to and from Korea in February, some going so far as to ban the entry of travelers from Korea.

Phrases like “out of control” and “prevention sabotaged” were used by foreign press outlets to describe the outbreak of coronavirus that arose in the city of Daegu and even the Korean public grew skeptical of whether containing the virus would ever be possible when the number of daily infections peaked at 909 on Feb. 29.

Korea was soon dubbed as a “success case” and cited as “hope for the future” when it came to containing the coronavirus, after Korean health authorities managed to flatten the curve within just a few weeks and without resorting to extreme lockdown measures.

Since then, Korea has actively shared its knowledge on tracking, tracing and treating — such as the guidebook published by the Ministry of Economy and Finance, which includes various information on social distancing guidelines — and has risen as the model country for handling the coronavirus crisis.

Korea’s brand image has soared and so has the demand for Korea’s cultural content.

Yet with travel restrictions and festivals moving online, content creators have been deprived of the chance to meet with their potential overseas buyers in person, hindering any new transactions from taking place.

The coronavirus has given Korea a chance to rebrand itself on the global stage, but it has in return, also cut off opportunities for Korean content creators to make the most of the new demand.

Korea has taken the lemon and created the most delicious lemonade ever, but how will it promote and sell that lemonade to the global market in the midst of Covid-19 and moving forward?

From Zero to Hero


Starting Jan. 28, the day that Korea’s first patient was diagnosed, to April 23, 8,610 reports were made by foreign press regarding Korea during 100 days. Of that number, 65 percent were about the government’s measures taken against the coronavirus, according to the Korea Culture and Information Service (Kocis).

“A considerable amount of these reports were favorable toward the Korean government, although there is no exact number on it,” said Lee Byung-jong, Professor at the School of Global Service at Sookmyung Women’s University and a former reporter at major foreign news agencies such as AP and Bloomberg, at a symposium held on July 1 with the theme of “Searching for new ways of promoting Korea and Korean culture overseas in the post-Covid-19 era.” The symposium was organized by the Korean Academic Society for Public Relations and sponsored by Kocis, providing a sphere of discussion among experts.

“The Korean government struggled in the early stages, but has been recognized by countries all over the world for its effective system and containment measures. The positive assessment from overseas news outlets was definitely the outcome of the success achieved by the government, the citizens and the medical workers. But the government’s overseas media promotion also played an integral part,” Lee said. 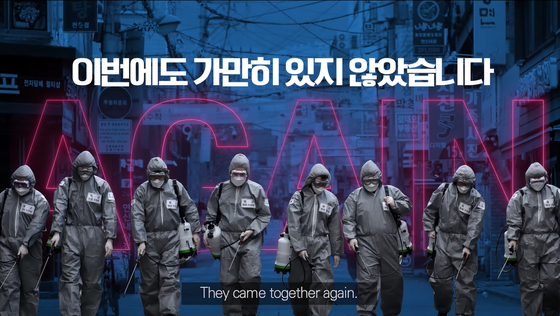 A captured image of "Korea, Wonderland?" video created by the Korean Culture and Information Service. The video has over 3.9 million views on YouTube as of July 23. [SCREEN CAPTURE]


One example of such promotion by the government includes a four-minute video created by Kocis, titled “Korea, Wonderland?” posted on YouTube on March 17. The video is a summary of how people are dealing with the coronavirus in all corners of Korea, including touching tales of how an 83-year-old woman “hand-stitched masks made of faded fabrics in the hope of helping those who can’t get masks” or how “donations flooded in” and “volunteer doctors and nurses flocked to virus-affected areas” in the country's time of need.

The video had some 4 million views and 16,800 comments as of July 21. Many different languages are seen in the comment section, and the comment with the most likes, 8,000, reads, “I’m from Europe, yet it was so inspiring! I admire and like Korea for so many reasons and this is one of them!”

The reason for the video’s success is definitely in part due to its timeliness, according to experts. Korea battled with a large-scale cluster early in February, when other countries had yet to face the virus to such an alarming extent. And as Korea began to grasp how to handle the situation, other countries were only beginning their battles. The video showed a realistic depiction of Korea, telling stories that the world needed to hear at this time, the same Korea that should be promoted overseas in the future according to Choi Yoon-hee, second vice minister of Culture, Sports and Tourism.

“The video gathered empathy from a global audience, while at the same time consoling people’s hearts by telling the story of altruism that shone amid a crisis. Overseas promotion should be about pursuing a universal value and connecting with the world. We need to find the common good, not just share self-complimenting stories. Now, when Korea stands higher than ever and the international society awaits our next step, it is high time that we set new strategies that are right for the times,” said Choi.


One particular industry that potentially has the most to benefit from the coronavirus is the content industry, especially cultural exports.

People stuck at home have naturally turned to various contents they can enjoy online, the likes of movies, games, dramas, cartoons and online concerts — which have already been staples of Korea’s cultural exports.

Last year’s content export volume amounted to an estimated $10.4 billion, recording an 8.1 percent increase from the $9.62 billion in 2018. A total of $4.81 billion worth of content was exported in the first half of 2019, of which 69.2 percent were games, 7.9 percent characters, 6.7 percent information and 5.4 percent being music. The numbers for the entirety of 2019 has yet to be released.

According to the Korea Creative Content Agency (Kocca), the demand for Korean content has definitely increased since the coronavirus outbreak, but ironically, the coronavirus is also what is preventing content creators from selling their work to overseas buyers, according to Park Seung-ryong, general director of the global business division at Kocca.

“Even though most of the popular content can be enjoyed online, new transactions are usually made through face-to-face events like content fairs or expos, especially for smaller-sized companies and individual creators. Fortunately, existing transactions have not been affected and prominent creators who have already set up their own networks are also coping with the situation. But even for them, the times are difficult — and even worse for the smaller, lesser-known creators,” said Park.

Whether or not content creators find a way of making the most of the new normal, post Covid-19 will greatly affect this year’s content exports, according to Lee Yang-hwan, general director at Kocca’s policy division, who gave a presentation on the Korean content industry’s status during Kocca’s first online forum held on July 21 under the title “Content after the Covid-19.” 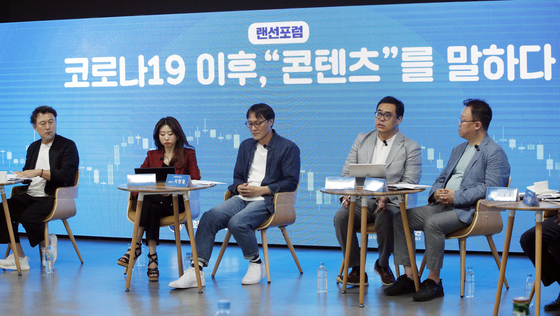 Experts sit for an online forum at the Gwanghwamun CKL Stage in central Seoul on July 21, on the subject of "Content after the Covid-19." [NEWS1]

According to the predictions for the content industry made by Kocca at the end of June, an optimistic outlook for sales exports could see the country garner a 3.3 percent increase in export volume compared to last year and record $10.7 billion in exports. On the flip side, the most pessimistic forecast would see an 8.6 percent plummet with $9.5 in exports.

In the most realistic scenario, there will be a similar export volume as the previous year, or a slight decrease, “depending on the games export.”

“I believe Korean content has the biggest potential to lead the Korean economy after the coronavirus pandemic,” said Kim Hyun-soo, head of the convention business department at CJ ENM. “It is an industry that could lead to the success of other industries across the Korean economy. The coronavirus is a threat, but it’s also an opportunity. The problem is, that we don’t have a clear answer to how to make the most of it. But the key will lie in how we translate our content into the digital realm.”


One defining characteristic of post-Covid-19 life is uncertainty, according to Cho Dong-chun, general manager of the business communication unit of SM Entertainment, admitting that “nobody knows the answer to anything.”

“We don’t know when the coronavirus will end, or whether any of our predictions about the post-Covid-19 world will actually be right. We’re uncertain, but one thing we do know now is that offline businesses need to transition into an online model,” he said. 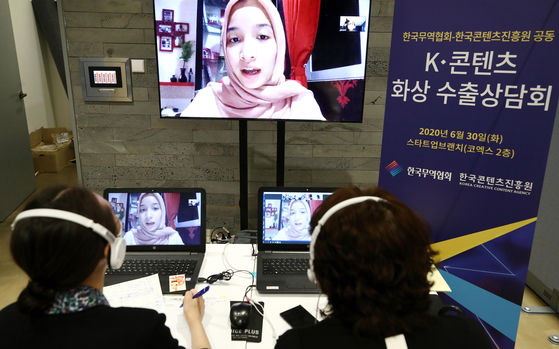 
One remedy offered by Kocca provides content creators with an opportunity to make use of the agency’s network of people through an online platform.

One such event took place on June 30, when Kocca invited Korean content creators to meet with foreign buyers through online meetings throughout the day. Co-hosted with the Korea International Trade Association, 35 content creation companies met with 50 potential buyers from across Asia — 33 from China, 11 from Japan, five from Indonesia and one from Vietnam.

Kocca announced that it set up an online counseling center at WelCon for those who are facing difficulties exporting their work and will later add new functions to allow creators to exhibit their work and meet with buyers through conferences and meetings through the website.

The culture ministry will also make the most of the new opportunity through its New Hallyu Promotion Policy, by promoting new Hallyu content exports to the global market with the help of already successful Hallyu content, such as K-pop, games and films.

The New Hallyu Policy, or K-Culture as dubbed by the culture ministry, will focus on promoting already-popular content through various methods online, such as holding an Asian Esports tournament in November or expanding financial support for the film industry, as well as helping grow industries, such as webtoons and literature, to reach a larger audience — mostly by financing translation services and providing export opportunities.

The policy will be promoted by 11 other related governmental bodies, such as the Ministry of Education and the Ministry of Foreign Affairs, taking into account three main missions: to diversify Hallyu contents, lead relevant industries’ growth through Hallyu and establish the foundation for the sustainable spread of Hallyu.

“Hallyu has the potential to encourage other related businesses to grow, but it is still centered around pop culture,” said Park Yang-woo, the minister of Culture, Sports and Tourism. “The information had been dispersed around many different bodies, which had hindered the efficient spread of Hallyu. We have put together the Hallyu Cooperation Committee for the first time with 12 related government bodies, and we vow to work together to plan and promote Hallyu as one.”