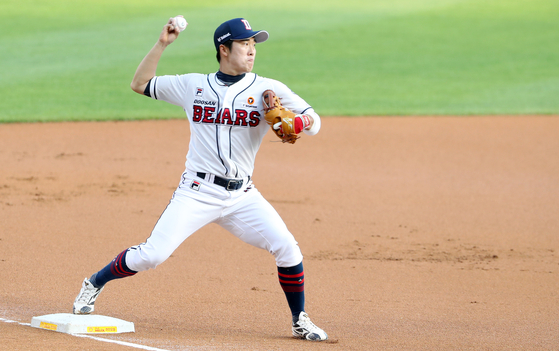 Doosan Bears' infielder Heo Kyoung-min throws a baseball during a game against the Lotte Giants on May 29. [NEWS1]

Doosan Bears infielder Heo Kyoung-min has emerged as one of the Seoul club's most important players this season.

Heo, who will earn his first-ever free agent status after this season, is proving himself both at bat and on the field. At bat, he's normally assigned at fifth or sixth to back up the center lineup. When the Bears face a lefty starter, he often appears as leadoff.

But Heo stands out even more in defense. He is considered the best third baseman in the KBO, but has regularly been filling in at shortstop this season while Kim Jae-ho has been out with shoulder pain. Shortstop was Heo’s main position back in high school, but since he joined the KBO he’s been playing at third.

Despite his success this season, Heo didn't have the smoothest start to the year. Right before the Bears left for spring training, Heo fractured his nose and it looked like his preparation might be seriously interrupted. Luckily for him, the season was delayed due to the coronavirus pandemic and Heo had time to recover and return to the entry.

Less than a month into the season on June 3, Heo fractured the little finger on his right hand during a game against the KT Wiz. Due to this, he wasn't much help in the early days of the season.

Although he was off the field for a few weeks, Heo worked hard to return. With his hard work, he managed to make it back into the entry on June 23, during the Bears game against the SK Wyverns. As of July 27, Heo has a 0.381 batting average with 72 hits and four home runs.

Below are edited excerpts of an interview with Heo.


Q. You’ve struggled with injuries this year. How have you overcome this?

A. This was the first time in my baseball career that I suffered a fracture. I had a very important season ahead of me and was playing through it, I was very disappointed. A lot of the people around me told me to think of it as a positive. And I hoped that it would be. But in the end, it all came down to my mindset. More than anything, I worked harder because I didn’t want to use my injury as an excuse. I think it’s all thanks to that.


Q. Your main position is third baseman, but these days you play more as shortstop. How are you finding it?

A. Last week, I told myself that “I guess I need to accept my appearance as a shortstop now.” It’s a position where one mistake stands out more than 10 saves. So it has a weird kind of pressure. I’ve been standing there feeling nervous the whole time. If I try my best, then I believe that [the fans] will see me positively.


Q. Back in high school, you, Oh Ji-hwan of the LG Twins, Kim Sang-su of the Samsung Lions and An Chi-hong of the Lotte Giants were known as the “Big 4” shortstops. How does it feel to be back in that spot?

A. Looking at my classmates like Kim Sang-su and Lee Hak-ju, their steps and defensive skills are great and I don’t think I can catch up to them. Since they’ve been playing as shortstop all this time, I can’t guarantee that I can play better. But until [Kim] Jae-ho comes back, I’m going to work as hard as I can so that [the team and the fans] don't feel his absence too keenly. I just go through it day by day.


Q. You'll earn your first free agent [FA] status once this season ends. How do you feel?

A. Well, a lot of people have been saying this. I’m not playing as a shortstop to raise my value when signing my FA contract. By playing for Doosan, I’ve received a lot more move than expected, so in this condition [where our starting shortstop isn’t at his best], I’m only thinking about trying to help out my team.


Q. You’ve been playing full-time for six years now. How do you think you've improved?

A. My attitude toward baseball has changed completely. I’ve become a little more relaxed. When I was a backup player or in my first or second year playing full-time, I wanted to give 100 percent for every single play. I didn’t want to fail. Since I only wanted to be perfect, I was harassing myself. But now, I continuously repeat to myself in my head that “I’m not a perfect person.”


Q. If you had to pick one thing, what would you say you need to improve on?

A. I would say the Doosan fans would say my batting has gotten better now compared to the 2014-2015 season. But still, improving my batting feels like an assignment that I have to carry along forever. I think expectations for my batting are a lot lower than my defense.

Until the day I retire, I want to show that I’m improving, step by step.


Q. There’s always high expectations toward the Bears. Looking at the regular season standing right now, you guys are falling further back from the top-ranked NC Dinos. Do you feel any pressure ?

A. Doosan is a club that has advanced to the Korean Series for five straight years. It’s obvious people have high expectations. Although we always seek the top spot, we’ve always been a team that tried its hardest within what we have and the situation we’re in. NC doesn’t seem to have weaknesses.

Rather than thinking that we have to catch up to them, I think it’ll be more realistic to tell ourselves to try our hardest in each and every game to stack up our wins. Numbers aren’t something we can promise. But we can promise to try our best.