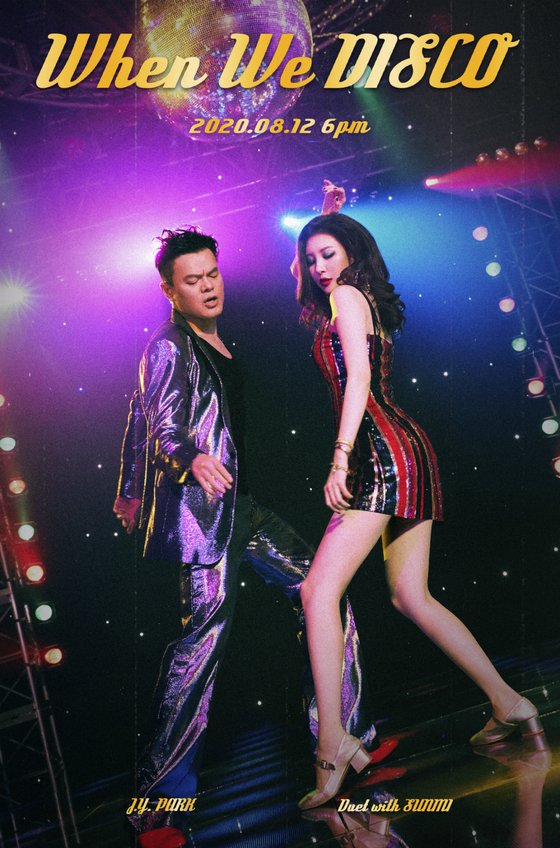 
Singer and producer Park Jin-young will drop a duet with singer Sunmi on Aug. 12, his agency JYP Entertainment announced on Monday.

According to the agency, the new single "When We Disco" will drop next week as the first duet between the two singers, who share a long history of working together since 2007 when Sunmi debuted as a part of Wonder Girls under JYP Entertainment, which was founded by Park.

The song will be a Euro-disco dance track finished with a retro touch, penned by Park himself.

The collaboration came about when Park had almost finished writing the song and Sunmi sent him a message with the music that she used to listen to back when she and Park were touring around the United States together, according to the agency.

"Park asked Sunmi for the duet because he thought the lyrics, especially the part that goes 'I miss it so when we disco,' resembled their memories so much, and Sunmi gladly said yes," the agency said.

Park debuted in 1994 and stormed the 1990s Korean music scene, before founding JYP Entertainment in 1997.

Fifty-eight songs that he wrote have topped local music charts.

Aside from his role of producing new talent, Park has also been actively releasing his own music such as "Who's your mama?" (2015) and "Fever" (2019).