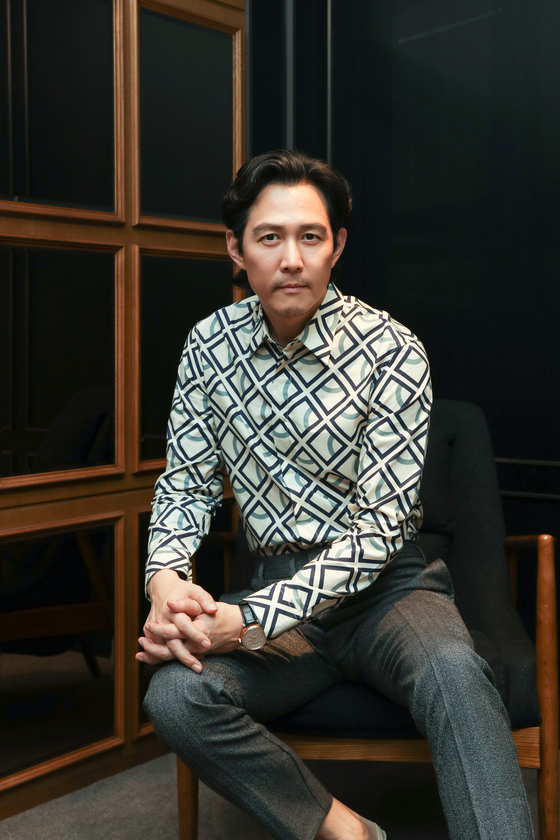 
Within the movie industry, there's a saying that if actor Lee Jung-jae portrays a villain, the film will be successful.

In his upcoming action film “Deliver Us From Evil,” which premieres on Wednesday, Lee plays a ruthless butcher-killer named Ray who is focused on one mission and only one mission only: to avenge his older brother killed by hit man In-nam (played by Hwang Jung-min).

While it may sound like Ray is a run-of-the-mill purpose-driven killer, Lee was determined to set his character apart and knew that the first impression he made on screen had to be powerful.

“In the script itself, there wasn’t much explanation about Ray, so I could only express him through [my] visuals and performance,” Lee said in a press interview at a cafe in Samcheong-dong, central Seoul, on Thursday.

“Rather than disclosing [the reason] why Ray pursues In-nam so blindly through his dialogue, I wanted all the questions answered as soon as the audience sees him, which is why Ray’s looks and expressions were so vital to his character. I just had to [give off an impression that] he’s just someone who has to get something done, there are no [rationalities] behind it.”

Lee played the part to the fullest — whenever Ray appears, even the air around him seem to quiver in fear — but what sets the character apart from other sinister villains is his sense of fashion.

Traditionally, killers on a mission wear dark clothes that can remain inconspicuous in the crowd — but throughout his chase, Ray appears on the scene donning white attire, flashy shirts with tiger print, luxury brands and clad in colorful tattoos that reach all the way up to his neck, suggesting that this killer is not only fashion conscious, but prefers to stand out in a crowd. 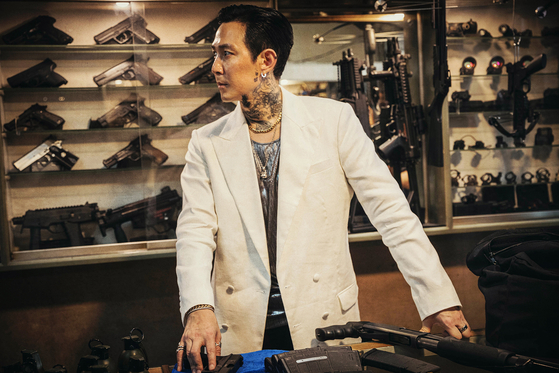 Actor Lee Jung-jae as merciless killer Ray, whose only goal is to avenge his older brother who was killed by a hit man named In-nam (played by Hwang Jung-min). [CJ ENTERTAINMENT]


When the script was first given to the actor, however, Lee said that Ray did not stand out as much.

“He was darker and had a certain mystique, the kind of killer whose narrative remained in the shadows,” Lee said. “But in the first meeting [with producers] the visual concept that I brought was red and pink hair, white boots and orange shorts (laughs).

“He was certainly one of the most peculiar characters that I had the chance to portray. I’ve got to test how much I can push through — I brought the strongest imagery that I could find and scaled it down a bit. After I was dressed in tiger- or zebra-patterned shirts, what I heard the most was that although it looks extravagant, it strangely suited Ray.”

To stay in character, Lee remained alone on the set. The veteran actor says that this is the best way to retain his emotions when he’s portraying a segregated character.

“On the set, I only talked about work with fellow actors — there wasn’t any time for us to have fun or talk,” he said. “But to bring out the best outcome, we needed to focus on our own characters.”

Jung’s action scenes are some of the best in the film — whether he’s combating In-nam or fighting the masses. The actor says that what’s vital to such scenes are his facial expressions. 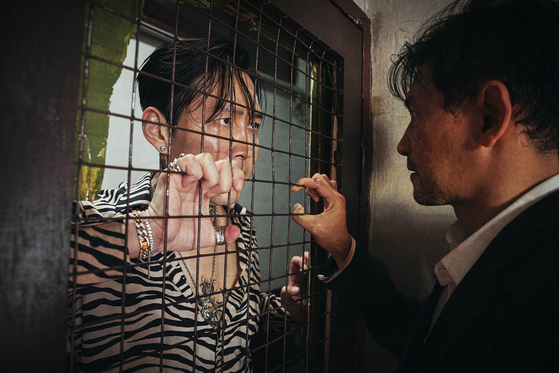 Ray and In-nam during their first face-to-face encounter. [CJ ENTERTAINMENT]


“Those momentary expressions — that’s what’s most important,” Lee said. “Action sequences are for show. What’s more important is what set of emotions the actor [is able to] bring between the action scenes. Which is why the scenes that I thought had the most impact were Ray’s expressions after the action. For instance, the way he always has a cup of ice coffee in his hand [and his expression] when he chews on the ice.”

The idea to make Ray a caffeine addict also came from Lee.

“The audience should instinctively shrink away from Ray,” he said. “But more than that, I wanted people to think of him as unique, odd and abnormal. The first scene that I had [as Ray] was in Japan, when he arrives on the scene to kill. But I thought it wasn’t enough to just have him walk in nonchalantly. Having an an ice coffee in his hand, [it builds up on the notion] that killing is something mundane to him.”

Even though the actor does his best to bring out new sides for every film, after 27 years in the business he admits that he does feel like he's hitting a limit nowadays.

“I feel that I have already pulled out everything inside me and used them all,” Lee said. “But when I’m given a good script, I do have this desire to [continue to show other sides of me], so I’m scraping up all I can and receive a lot of help from the crew [for recent films].

“I’m sure all of you have experienced this before,” Lee continued. “It’s like there are certain styles of attire that suit me and that I enjoy regularly, but when someone gives me apparel as a gift, and when I try them on and it doesn’t suit me — that’s what I’m afraid of [in acting]. After being in this business for so long, I’m not sure if I can manage the outfits [roles] that are given to me. I [constantly] wonder if I’m summoning up what I did before, and if I’m out of ideas, I’m tempted to use what I did before — just modify some parts. To be honest, after showing so much of the person called Lee Jung-jae, it’s a pressure [now] to show more.”

Despite the mounting pressure, his everlasting thirst for films may be one of the many reasons why the actor is turning to filmmaking. Last month, the news was finalized that Lee is to debut as a director in his film tentatively titled “Hunt.” Lee is to participate in scriptwriting and feature as a lead role as well.

Lee first came across the notion of filmmaking when he was filming for “The Thieves.”

“I’ve only heard before that in Hollywood, actors also write scripts, produce and direct films,” Lee said. “I thought that was only limited to Hollywood. But when we were filming in Macau, actor Ren Dahua told me he’s produced his friend’s film last month, and this month a script he wrote will be going into production as a film, and in a few months he’s going to direct another film. That hit me hard. That’s when I realized that it’s not about what part I play in making a good film and motivated me [to start filmmaking].”