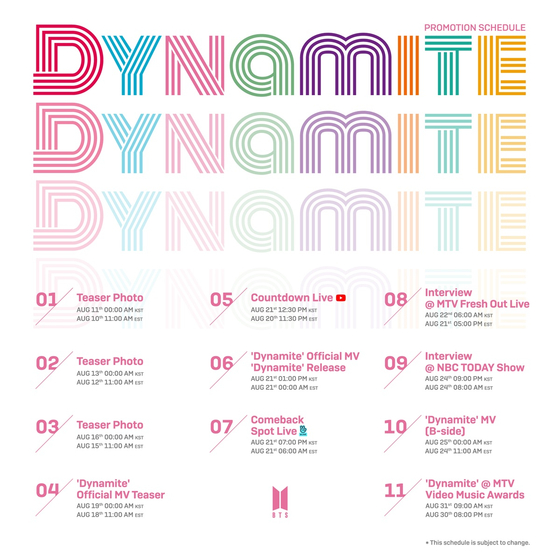 
K-pop boy band BTS will perform its upcoming new single "Dynamite" at the 2020 MTV Video Music Awards in the United States, according to the group's agency Wednesday.

The Korean septet will make its television debut for the new song, set to drop on Aug. 21, at the award show slated for Aug. 30 (local time) in the United States, according to Big Hit Entertainment.

The appearance will mark BTS's first-ever performance at the American music award show.

"On," the lead song on the band's album "Map of the Soul: 7," has been nominated in three categories for the award show — Best Pop, Best Choreography and Best K-pop.

Big Hit also announced that the music video for "Dynamite" will have two versions, an "official" one and a "B-side" version.

"Map of the Soul: 7," BTS's fourth studio album, was the most-sold album in the United States in the first half of 2020, becoming the only album to sell more than 500,000 units in the U.S. market during the January-June period, according to Nielsen Music.

At home, BTS topped the South Korean Gaon chart run by the Korea Music Content Association, selling a record 4.26 million copies in the first half.

The septet also came to No. 1 on the Japanese Oricon album chart during the period, becoming the first international artist to claim the honor in 36 years after Michael Jackson with "Thriller" back in 1984.