Toronto Blue Jays' starter Ryu Hyun-jin said Wednesday that he has refreshed his mind to get ready to make a turnaround from his worse-than-expected previous outings.

"I performed poorly in the last games," the left-hander with his new short, neat haircut said in a video interview. "I had my hair cut to get myself up for the next match.”

He will start the game against the Atlanta Braves at Trust Park in Atlanta, Georgia, on Wednesday, or 8:10 a.m. on Thursday morning, Korea time. It is Ryu's third outing of the 60-game 2020 season, which was shortened due to the novel coronavirus pandemic. 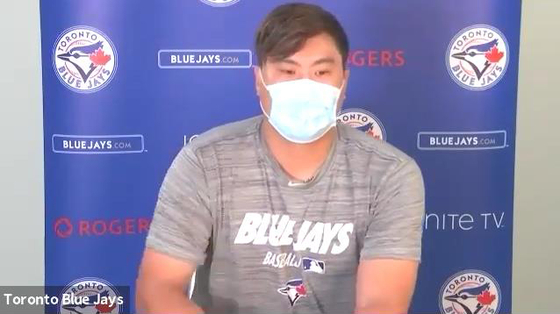 
In his first game against the Tampa Bay Rays on July 25, he got a no-decision, giving up three earned runs in 4 2/3 innings.

His next start was poorer as he suffered his first loss against the Washington Nationals last Friday, allowing nine hits and five earned runs in 4 1/3 innings.

Ryu's ERA now sits at 8.00, compared with last year's league-leading 2.32 ERA while he was pitching for the Los Angeles Dodgers.

The 33-year-old southpaw joined the Toronto Blue Jays after inking a four-year $80 million contract as a free agent last December. He'd spent the past seven years with the Dodgers.

Ryu said the main issue was his fastball command, and he is making all-out efforts to improve his pitches in the upcoming game.

"I couldn't control the locations of my pitches in two previous games," he said. "I've studied my pitches and done a lot of things.”

He said his wife and daughter, now staying in Florida, will go back to Korea soon, as the U.S. state is struggling with a spike in new Covid-19 cases.

"They are preparing to go back to safe Korea," he said. "Some would feel this season is short, or others say it's long. I'll do well even though I am left alone.”

Earlier this month, the Canadian federal government rejected the Blue Jays' plan to play home games in Toronto and have visiting American teams flying in and out of the city because of Covid-19 concerns. The club's hope of sharing PNC Park with the Pittsburgh Pirates was later squashed by the Pennsylvania state health authorities.

The itinerant Blue Jays settled on Sahlen Field, their Triple-A park in Buffalo, New York, as their temporary home, but the stadium is currently undergoing an upgrade to meet major league standards and won't be ready until later in August.