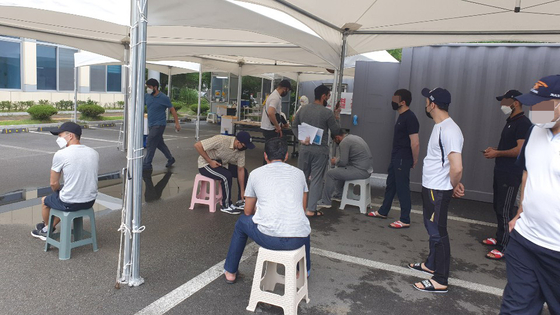 People wait to be tested for the coronavirus at a Covid-19 testing site in Cheongju, North Chungcheong, Wednesday, after health officials announced six Uzbek nationals in the city have tested positive this week. [YONHAP]

Some 340 people who attended an Islamic event in Cheongju, North Chungcheong, have all tested negative for the coronavirus, health officials said Thursday, easing concerns of a growing cluster after six Uzbek attendees were recently diagnosed with Covid-19.

About 120 others who had close contact with the six Uzbek nationals also showed negative results, leaving the Cheongju cluster at six.

Officials said they would keep close tabs on them nonetheless as they self-quarantine for the next two weeks, the incubation period of the virus.

The positive news came as the Korea Centers for Disease Control and Prevention (KCDC) announced Thursday morning that 46 new coronavirus cases were detected nationwide Wednesday, 20 of which were imported cases. Five were from the United States, along with four from Russia, two from Uzbekistan and one each from Kazakhstan, Lebanon, Japan, Pakistan, the Philippines, France, Mexico, Brazil and Cameroon.

Among locally infected patients, 11 live in Gyeonggi, five in Seoul, three in Busan, two in North Gyeongsang and one each in South Chungcheong and South Jeolla.

As of Wednesday at midnight, Korea had counted 14,499 coronavirus patients in all. 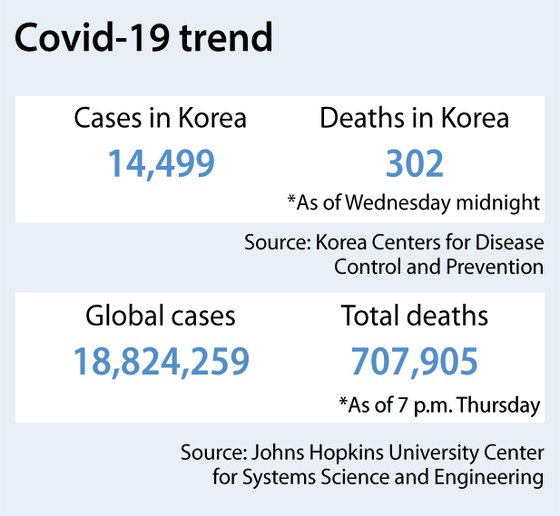 The religious event was held on July 31 at Shinyulbong Park, hosted by the Cheongju Islamic Center to celebrate Eid al-Adha. Eid al-Adha is one of the most important holidays of the Islamic calendar, marking the end of the hajj, the annual pilgrimage to the holy city of Mecca that all Muslims are supposed to perform at least once in their lifetime. Muslim communities normally gather on this special day for prayers and feasts.

Cheongju officials initially said five of the six Uzbeks who tested positive for the coronavirus Monday or Tuesday went to the festival, but later corrected its statement to say all six went.

How and where they got infected is still a mystery. One patient who tested positive on Monday said he felt symptoms of the virus from July 30, one day prior to the religious gathering.

Cheongju officials said contact tracing on the Uzbek patients were taking longer than normal due to the language barrier, as they all can only speak in Uzbek.

In Goyang, Gyeonggi, an entire family of five tested positive for the coronavirus Wednesday, along with at least three others who had contact with them.

How the family got infected was not immediately known, but officials said the mother said she began feeling symptoms of the coronavirus on Tuesday, including a fever, cough and throat pain. Her husband later told epidemiologists he started feeling feverish on Sunday.

Officials said the father is a pastor at a small church in Goyang and runs a sales business in Gangnam District, southern Seoul, while the mother is a nurse at an elementary school in Yangju, Gyeonggi. Two church members have tested positive so far, as well as another teacher at the school.

Their eldest child is a college student, but hadn't been in school lately. The two younger siblings, on the other hand, had gone to the same high school for several days recently. All students and faculty members from the elementary and high schools are now being tested for the virus.