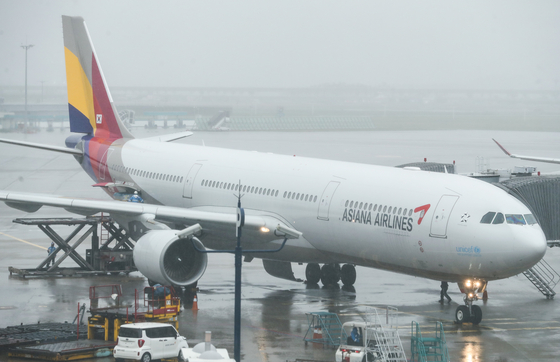 
The Asiana Airlines takeover may be back on track as the buyer indicated that it was open to a face-to-face meeting with the seller, which enthusiastically welcomed to overture.


Hyundai Development Company (HDC) on Sunday said that it would meet with Kumho Industrial, which owns 30.77 percent of Asiana Airlines, under the condition that a revaluing of the troubled carrier be discussed.

Kumho Industrial has been complaining for weeks in public about HDC's unwillingness to engage in person. On Monday, it said in a statement that it was positively inclined toward HDC’s Sunday statement.

The agreement by Kumho Industrial suggests that the pricing of the transaction could be renegotiated, as the terms set out by HDC made a discussion of revaluation a precondition for meeting.

“Our basic stance is HDC and Kumho Industrial meet as an acquirer and a seller under the premise that Kumho Industrial acknowledges the appropriateness and necessity of the re-evaluation of the acquisition, and rapidly pushes for the negotiation,” HDC wrote in the statement.

HDC suggested Kumho Industrial set the specific date and location for the face-to-face meeting, and said the meeting should be attended by the CEO of both companies. HDC’s announcement arrived two days before the Aug. 11 deadline for the acquisition.

“Kumho Industrial argues it is able to cancel the deal since HDC hasn’t yet paid for the takeover,” the statement added. “HDC believes the acquisition should be re-evaluated for the deal to be closed since the seller’s obligations haven’t yet been met.”

HDC has been arguing Kumho Industrial has to explain a 2.8-trillion-won ($2.36 billion) increase in the debt of Asiana Airlines since the acquisition deal was signed in December.

HDC’s latest statement suggests the company’s enthusiasm to acquire Asiana Airlines has grown as the uncertainties over the airline business have started to lift, according to Choi Jeong-chul, an aerospace engineering professor at the Graduate School of Manufacturing Innovation at Inha University.

“But HDC should have been more active about the acquisition by suggesting specific standards for re-evaluation and a timeline,” Jeong added.

In the second quarter, Asiana Airlines reported 116.2 billion won in net profit, a turnaround from its 183.14-billion-won net loss a year ago, on the growth of cargo transportation. In the first quarter, the full-service carrier reported 683.26 billion won in net loss, 666 percent jump on year.