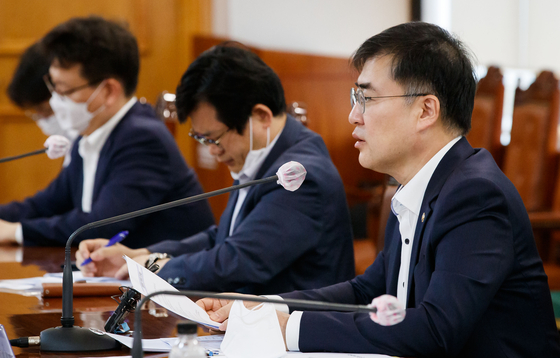 
All ways to keep cash-strapped Asiana Airlines afloat are being considered including nationalization, according to Financial Services Commission Vice Chairman Sohn Byung-doo.


Asked about possible public ownership of the country’s second-largest air carrier, Sohn told reporters Tuesday that “discussions about [the fate of Asiana Airlines] are being held with related parties taking all possibilities into account.”

He added, “There’s no need to rashly conclude which direction [Asiana Airlines] is heading.”

The subsidiaries include budget carriers Air Busan and Air Seoul.

A consortium consisting of HDC and Mirae Asset Daewoo signed a deal with Kumho Industrial, which owns a 30.77 percent stake in Asiana Airlines, to acquire Asiana Airlines late last year, well before the impact of Covid-19.

In recent months, HDC has been claiming Asiana hasn’t met obligations to conclude the deal.

“The situation hasn’t changed,” said Cho Min-jae, a spokesperson for the KDB, on Tuesday.

The state-run KDB and Eximbank could own around 37 percent shares of Asiana airlines if they convert 800 billion won ($668 million) worth of bonds into stock.

“Justification for the nationalization of Asiana Airlines is that the government will resell the airline to a private company once its value recovers after Covid-19,” said Prof. Hur Hee-young, who teaches business at Korea Aerospace University. “But for the airline’s value to rise, a competent CEO needs to come in, not someone assigned by the government.”

Hur added there are hardly any nationalized airlines in developed countries.

"Thai Airways and Mongolian Airlines are a few state-run airlines. Such public airlines are difficult to compete against," Hur added.