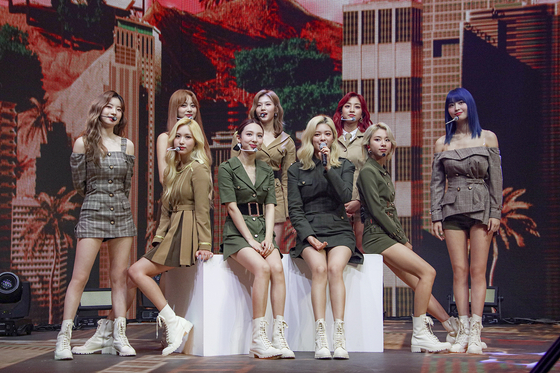 
While online concerts first started as a means for K-pop acts to perform concerts during the coronavirus, the realm may also be the most effective means to meet fans around the world, as proven by girl group Twice’s first online concert “Beyond LIVE – Twice: World in A Day” held on Sunday through Naver V Live.

Twice’s “World in A Day” was held under the concept of traveling the world in a day via an online tour, where the stage was themed around 16 cities across the world and the songs were rearranged to match the vibe of the different cities, from Seoul to Bangkok, Manila and Singapore to Los Angeles, New York and Chicago. Keeping true to the theme, thousands of fans from 126 countries around the world joined in to watch the concert, paying a minimum of 33,000 won ($28) per ticket. 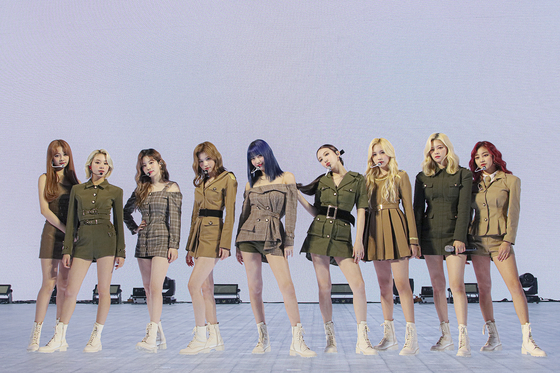 “We get to see Once around the world in one day today,” said Chaeyoung.

“We were looking forward to this concert so much, and this is finally it,” said Nayeon. “We can see Once [on the screen] in front of us and we can hear you cheer. This is amazing!”

Even though member Jeongyeon had to take part in the concert sitting on a chair “due to health issues,” the band sported its professionalism by performing all 15 songs without a glitch. Two tracks — “21:29” (2020) and “Love Foolish” (2020) — were performed for the first time, and for the finale song, Twice chose “Cheer Up” (2016) in hopes of cheering up the fans in the midst of the coronavirus pandemic. 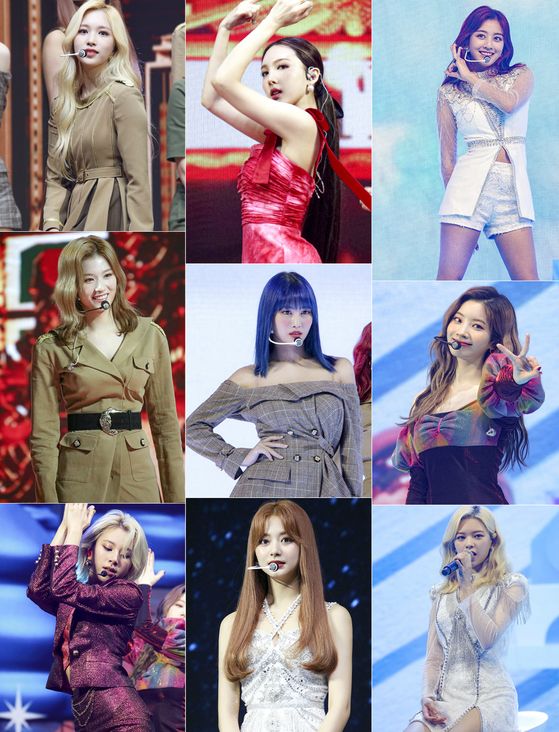 
In between the performances, the screen showed 200 fans cheering live from their homes. The digital platform allowed Twice to talk with three fans during a live session, as well as read the viewers’ online comments and hear them cheer during their performances. For the “TT” stage, a prerecorded video of the members clad in white costumes was combined with the members performing in red costumes to create a mirrored image of the group.

“We last met with Once in February, and I’m glad we got to see you at least through videos,” said Jihyo. “I hope that it all gets better soon so that we can meet you in person and hold the ‘Beyond LIVE’ concert at the same time, and we’ll be able to meet with more Once than ever. We had so much prepared, and I hope the day comes to show you everything.”

Twice thanked the fans for joining them for its first ever online concert, and instead of an encore stage, the group took questions from the online comment section in a surprise live session, which will not be included in the concert video that will be posted later. Twice also announced the news that an English version of “More & More” will drop soon.

“There might come a day where we talk about this day as a bygone memory,” said Jihyo. "I hope today becomes a cherished memory that we can look back on in the future.”

twice world in a day beyond LIVE concert