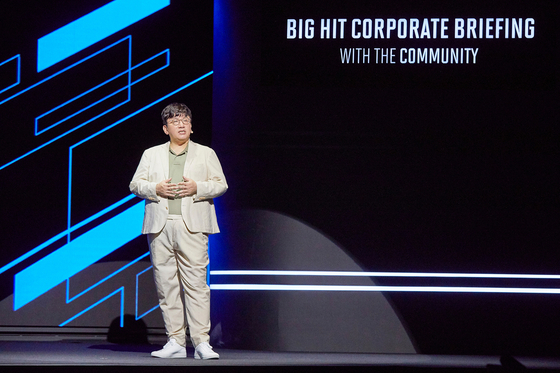 
Big Hit Entertainment, which represent BTS, reported a record first half despite the pandemic resulting in a cutback of concert schedules.

The solid performance suggests that the initial public offering is still on track and could happen this year.

According to preliminary results Thursday, the company reported an operating profit of 49.7 billion won ($42 million) during the Jan.-June period this year which is the highest in any first half for the company. Sales totaled 294 billion during the cited period.

The operating profit in the first half was half of 2019's full-year number despite the pandemic.

Bang Si-hyuk, chairman and CEO of the company and mastermind behind BTS, was confident about Big Hit's performance in the latter half of this year, saying that BTS would be back at full steam following a coronavirus-related slowdown and that a new act would be introduced.

“BTS’s world tour schedule had to be totally revised due to the coronavirus, but through the setback the company was able to make profit in various areas by focusing on content and fandom,” said Bang at an online event streamed through YouTube on Thursday.

He said the diverse lineup of K-pop groups helped the company get through difficult times.

Artists from Big Hit Entertainment have about a 40 percent share in terms of album sales in Korea in the first half, according to data from Gaon Chart.

Bang said BTS as well as Tomorrow X Together, also known as TXT, will make a comeback in the fourth quarter of the year. Seven-member boy group BTS will hold an online and offline concert called "BTS Map of the Soul ON:E" in October.

Big Hit will debut a new K-pop act this year through a TV program called "I-LAND", which is produced by Belift Lab, a joint venture between Big Hit and cable broadcaster CJ ENM. The finalists will be selected soon.

Although many offline events have been canceled due to the virus, Big Hit said it was able to generate some revenue from the secondary intellectual property (IP) businesses, which include webtoons, online games and character products based on their artists. BTS recently introduced TinyTAN, an animated version of the boy band.

According to the company, profit generated from such indirect IP businesses accounted for 45.5 percent of the total in 2019 — an increase from 22.3 percent in 2017.

Big Hit has recently passed a preliminary screening by the Korea Exchange to go public. Its market value is estimated to be above 4 trillion won.