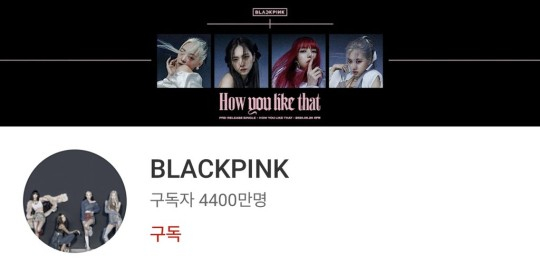 Girl group Blackpink has surpassed rapper Eminem to become the artist with the fourth-largest number of YouTube subscribers in the world, the group’s agency YG Entertainment announced on Monday.

The number of subscribers to Blackpink’s official YouTube channel surpassed 44 million on Sunday at 9 a.m., the agency said.

On July 24, Blackpink overtook pop star Ariana Grande to become the female artist with the most YouTube subscribers in the world. Now the group ranks fourth after Justin Bieber, DJ Marshmello, and Ed Sheeran.

Since the group released "How You Like That" on June 26, the number of subscribers to Blackpink’s YouTube channel has been increasing by an average of 100,000 each day.

Blackpink will release a new song featuring American pop star Selena Gomez on Aug. 28 prior to its first full-length album coming up on Oct. 2.