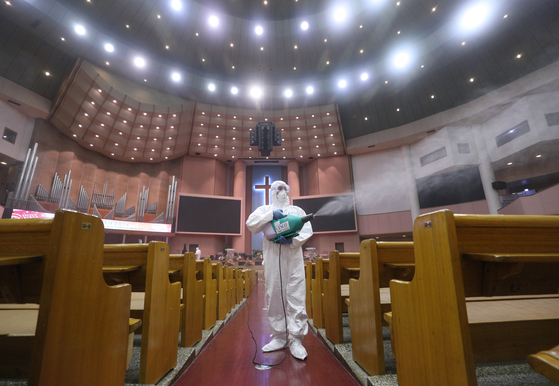 Workers disinfect the Yoido Full Gospel Church in Yeouido, western Seoul, Tuesday, after three adherents tested positive for the coronavirus. All churches in Seoul, Incheon and Gyeonggi have been banned from holding activities, including services and prayer groups, until Aug. 30. [NEWS1]

All churches in Seoul, Incheon and Gyeonggi will be prohibited from holding any activities from Wednesday, while businesses with high risks of virus transmissions — including clubs, internet cafes and noraebang, or singing rooms — will be shut down. So will indoor public institutions such as museums and libraries.

On Saturday, the central government raised the three-tier social distancing levels for Seoul and Gyeonggi from Level 1 to Level 2, effective on Sunday. On Tuesday, it went further and said many measures that were “recommended” in the Level 2 system will now be compulsory, or “forced.”

Incheon was also included in the Level 2 group Tuesday, which means all three regions that compose the greater Seoul area will be subject to the same tightened measures.

Under those tightened measures, churches in the Level 2 areas will be forced to hold services online.

Twelve types of “high-risk” businesses will be closed, including clubs, bars that specifically involve dancing or “table-hopping,” or moving between tables to mingle with others, door-to-door sales businesses, hagwon (private cram schools) with 300 students or more, buffets, noraebang and internet cafes.

The new rules will stay in place till Aug. 30, after which authorities will decide whether to ease the restrictions based on the spread of the virus.

Chung’s grim remarks came as 246 people were newly diagnosed with the coronavirus Monday, up from 197 people the day before.

Most new cases were from the capital and the surrounding province of Gyeonggi, specifically traced to the Sarang Jeil Church in Seongbuk District, central Seoul, Korea’s latest major hot spot.

The Presbyterian church is known to have some 4,000 adherents, and is led by Rev. Jun Kwang-hoon, a politically controversial figure and vocal critic of President Moon Jae-in. Jun participated in a large antigovernment rally last Saturday on Liberation Day and tested positive for the coronavirus two days later.

By Tuesday noon, the cluster from Sarang Jeil Church reached 457 related cases, up 138 from 24 hours earlier. Health officials warned that infections traced to the religious community were being detected throughout the country as patients spread the disease in their respective social circles.

The Sarang Jeil Church has become the second largest Covid-19 cluster for Korea, trailing the cluster from the Shincheonji Church of Jesus in Daegu, another controversial Christian sect that reached 5,214 related cases in February and March. Korea’s third-largest cluster was a string of infections at night clubs and bars in the international hub of Itaewon, central Seoul, which hit 277 related cases in May.

According to data released by the Korea Centers for Disease Control and Prevention (KCDC), among the 457 people linked to the Sarang Jeil Church, 282 live in Seoul, 119 in Gyeonggi, 31 in Incheon, eight in South Chungcheong, five in Gangwon, four each in North Gyeongsang and North Jeolla, and two each in Daegu and Daejeon.

The church, which is currently shut down, used to attract worshippers from all over the nation, even as far as Jeju Island.

Chains of infections connected to the church have so far occurred in at least seven different places, the KCDC said, including another church, two call centers, a nursing hospital, a senior welfare center, a Lotte Homeshopping office and the Severance Hospital in Sinchon, western Seoul.

Authorities urged anyone who visited Sarang Jeil Church from July 27 to get tested for the coronavirus immediately even if they’re not exhibiting any symptoms.

Anyone who participated in the antigovernment rallies near Gyeongbok Palace on Aug. 8 and Gwanghwamun Square last Saturday were also told to get examined, as health officials mentioned that some 10 patients linked with the church had joined those demonstrations. No virus transmissions have yet been found among protesters.

Many more infections are expected to rise from Sarang Jeil Church in the coming days, as health authorities warned Tuesday that hundreds of churchgoers haven’t been tested yet.

While officials are trying to test some 4,000 people who recently visited the church or are officially registered as adherents, only about 2,500 people had been tested by Monday at midnight, the KCDC said. Vice Minister of Health and Welfare Kim Gang-lip said Tuesday morning that nearly 3,200 people were under self-quarantine, 200 people weren’t picking up their phones to receive guidelines for testing, and officials couldn’t verify the phone numbers or addresses of 590 people.

Lee Seung-ro, chief of the Seongbuk District Office, blasted the Sarang Jeil Church in an MBC radio show Tuesday morning, saying the list of adherents and recent visitors the church had submitted to the district office was “deeply flawed.”

Lee said his office was bombarded with “hundreds” of angry phone calls from people asking why they were being forced to get tested for the coronavirus when they had no links to the church. It turned out, Lee continued, that the list included phone numbers of people who had quit going to the church five to 20 years ago, and people who gave their relatives' phone numbers when church members tried to proselytize them on the streets.

Lee stressed that anyone who visited the church from Aug. 7 to 13 had to get tested and undergo a 14-day self-quarantine period even if they turn out negative because they were in the vicinity of infected patients.

Those who are officially registered with the church but hadn’t gone to services lately still have to be tested, but they can skip the self-quarantine procedure if they can prove to officials they hadn’t been to church for a while, Lee said.

Other than Sarang Jeil Church, at least four cases have been traced to the Yoido Full Gospel Church in Yeouido, western Seoul, Korea’s largest Protestant church with nearly 560,000 adherents. The Seoul Metropolitan Government initially said Monday that 10 Covid-19 cases have been linked to the church, but later changed the number to four.

The Ministry of National Defense said all enlisted soldiers and ranking officers will be forbidden from leaving their bases for vacations or any other outings with the exception of medical treatment at hospitals.

Among Monday’s 246 new Covid-19 cases, 11 were from abroad: two from France and one each from the Philippines, Pakistan, Kazakhstan, the United States, Mexico, Chile, Guinea, Gabon and Ethiopia.

One patient died Monday, bringing Korea’s total death to 306. Seventeen people recovered, bringing total recoveries to 13,934. In all, the country has counted 15,761 coronavirus cases as of Monday at midnight.