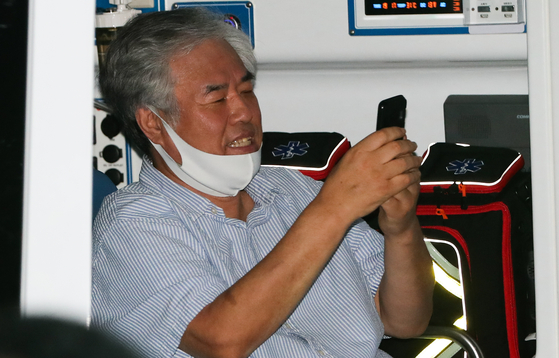 Rev. Jun Kwang-hoon, a pastor at the Sarang Jeil Church, is spotted texting inside an ambulance from the Seongbuk District Health Office in central Seoul on Monday. Jun tested positive for Covid-19 that day and was sent to an isolation ward. [NEWS1]


Rev. Jun Kwang-hoon, the outspoken pastor of Sarang Jeil Church, is facing heightened scrutiny of his political activities and religious credentials, following widespread criticism for his role in potentially fueling a growing virus cluster in Seoul.

Jun is the founder of the Sarang Jeil Church in Seongbuk District, central Seoul, a Presbyterian church with some 4,000 adherents, and recently the source of a major coronavirus cluster after ignoring social distancing guidelines. He led members of his church in a Liberation Day rally of conservatives in central Seoul Saturday, despite the city government’s ban on large gatherings due to coronavirus concerns.

Jun tested Covid-19 positive the following Monday, and hundreds of members of his church were also found to be infected.

“We will hold a rally on Aug. 15 that will overturn the universe,” Jun said in a May 17 sermon, referring to the demonstration in Gwanghwamun Square.

Jun, also president of the Christian Council of Korea (CCK), has been a fierce critic of President Moon Jae-in and was indicted in March over alleged violations of the election law. He was released the following month on the condition that he does not partake in any rallies related to the pending case.

Such remarks were made in his first sermon following his release.

In Christian circles, his critics have begun to suggest that Jun is more of a far-right politician than a pastor.

Jun was born in 1956 in North Gyeongsang and joined the ministry in 1980. He later established the Sarang Jeil Church, but is more widely known for his political activity.

“Rev. Jun’s remarks until now seem far from ones that should be made by a religious leader," said Kim Sang-deok, a senior researcher with the Christian Institute for the Study of Justice and Development. "While holding the title of pastor, he is regularly instigating political and ideological remarks far from the Christian spirit of love and peace."

In 2008, Jun founded the Party of Practice of Christian Love, pushing for the “eradication of pro-North Korea and anti-American leftists.” He later established a similar party in 2012 and the Christian Liberty Party in 2016, ahead of presidential elections, but they both failed to reach the minimum 3 percent in polls to secure a proportional representative seat.

“There is a cautious atmosphere within the church community, because how you refer to Rev. Jun Kwang-hoon could reveal your political inclinations,” Cho Seong-don, head of the Christian Ethics Movement of Korea, said. “This is a point-blank example of why Rev. Jun no longer can be seen as a religious figure and is a politician.”

Jun’s educational background has also been called into question.

He claims to have entered the Daehan Theological Seminary, a Presbyterian seminary in Anyang, Gyeonggi, in 1978, majoring in theology before becoming ordained.

But some of his fellow Presbyterians are alleging that Jun never attended the seminary and that his ordination was a forgery.

The Protestant community generally views Jun’s activities negatively, according to a survey released by the Christian Institute for the Study of Justice and Development in October 2019. According to this poll, 64.4 percent of respondents thought that Rev. Jun “does not represent Korean churches and is seriously damaging the status of Christianity.”

Yoon Seung-yong, the director of the Korea Institute for Religion and Culture, acknowledged Korea’s history of intertwining religion and politics, stemming back to the 1910-45 Japanese colonial rule. But even so, he said Jun’s activities stand out.

“Rev. Jun’s remarks and activities, crossing the boundaries of common sense, are threatening the social community,” Yoon said. “He needs to exercise restraint and show reform within the Protestant community.”