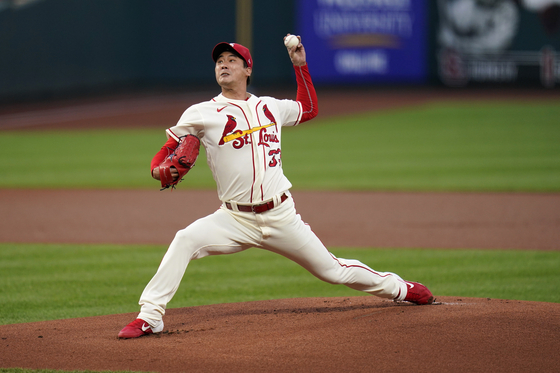 Kim Kwang-hyun of the St. Louis Cardinals throws a pitch during a game against the Cincinnati Reds at Busch Stadium in St. Louis on Saturday. [AP/YONHAP]


Kim Kwang-hyun of the St. Louis Cardinals is finally living his dream.

Kim, who moved to the MLB this year, picked up his first-ever major league win against the Cincinnati Reds at Busch Stadium in St. Louis on Saturday.

By tossing six scoreless innings, Kim managed to help his team pick up a 3-0 victory against the Reds. Kim tossed a total of 83 pitches throughout six innings and struck out three while giving up three hits and no walks. Of his 83 pitches, 55 were strikes.

"This is something I've dreamed about since I was a child," Kim was quoted as saying on MLB.com. "It's been a long time, but I made my dream come true. It's one of the nights I can't forget."

Kim got off to a great start, grounding out leadoff Joey Votto with a full count. He retired the next two Cardinals’ batters with a line drive from Nicholas Castellanos and another grounder from Matt Davidson.

Having retired another three batters in the second inning, Kim’s no-hit streak ended when Kyle Palmer made good contact at the top of the third. After another full-count match-up against Votto, Kim ended up striking him out with a slider, his strongest pitch.

With the Cardinals leading 3-0, Kim left the mound after tossing the sixth inning. As the Cardinals’ bullpen managed to shut down the Reds’ batters, Kim was able to pick up his first win and a quality start.

"He's a take-it-as-it-comes kind of a guy," Shildt was quoted as saying on MLB.com. "He's going to compete, regardless [of] when and where you pitch him, for the team, and you just have a lot of respect for a guy that has that team mentality of, 'wherever you need me, however you need me, I'm going to be available and I'm going to get it done.'"

Kim’s strong performance allowed him to lower his ERA from 3.86 to 1.69. This season, Kim has picked up a win and a save for the Cardinals.

This was Kim’s second start in the majors. Although he made his big league debut in the bullpen, he was given a shot as a starter when a number of Cardinals players tested positive for Covid-19.

In his first start against the Chicago Cubs on Aug. 17, Kim gave up a run throughout two-thirds of an inning and walked away with a no decision.

After 12 seasons playing for the SK Wyverns in the KBO, Kim finally made his way to the United States this season by signing a two-year contract at $11 million with the Cardinals in December 2019. Kim was able to sign with the Cardinals quicker than expected as he was flexible with the position that he was going to play.

"Being able to change speeds is important," Shildt was quoted as saying. "Disrupts guys' timing, gets guys in between, and he's got the ability to do that to righties and lefties and work both sides of the plate up and down. He's a pitch-maker. It's the art of pitching."

It wasn't only Shildt who complimented Kim. His teammate, shortstop Tommy Edman, also complimented his handling of a rough first season in the major league.

"To have his first year over here in the United States, and to have this really weird year where nothing is normal, and moving around in his role, to start as a closer and being built up to be a starter," Edman was quoted as saying on MLB.com, "to keep throwing as well as he has, it's just incredible. You've got to tip your cap to him."

While Kim picked up his first win in the big league, Ryu Hyun-jin of the Toronto Blue Jays wasn’t able to add to his stats as the Blue Jays lost 2-1 to the Tampa Bay Rays on Saturday.

Ryu gave up one run throughout five innings and walked away with a no-decision game as the two teams were tied at 1-1. With the game heading into extra innings, it was the Rays that broke the silence and picked up a win.

Throughout the five innings, Ryu gave up three hits while striking out six with no walks and one run earned. This is the second consecutive game where Ryu hasn't given up any walks.

With another solid performance, Ryu lowered his ERA to 3.19.

Choi Ji-man also appeared in the game for the Rays as a pinch hitter and was given a walk.