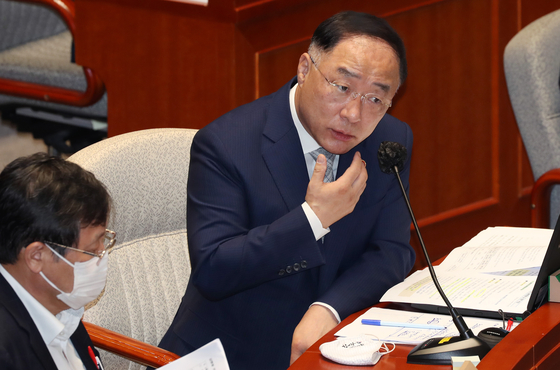 
Finance Minister Hong Nam-ki expressed reservations about a second round of emergency relief grants to combat the economic effects of the coronavirus.

“In the first emergency relief grants, to minimize the issuance of government bonds we had to restructure existing budgets by over 10 trillion won ($8.4 billion),” Hong told lawmakers at a National Assembly hearing on Monday. “If we are to create [a second round of] emergency relief grants, issuing government bonds will be 100 percent inevitable.”

A resurgence of the coronavirus on top of a summer of heavy rainfall have hurt the economy, raising doubts over an economic rebound in the third quarter.

Members of the ruling party and even opposition lawmakers are claiming an urgent need for relief grants, especially to help lower income households.

Hong said Monday the government has no projects it can cancel or restructure to finance a second round of grants.

The first round did have an impact on improving the Korean economy, he said, and the economy is actually in better shape now than in May.

“We have to see the trend this week,” Hong said. “[However], the current economic situation is showing signs of recovery.”

Instead of discussing grants, the country should be focusing on containing the resurgence of the coronavirus.

“The purpose of a second round of emergency relief grants would be to encourage and give hope to the public, who are struggling with Covid-19, as well as stimulating spending,” Hong said. “However, we should be focused now on quarantining instead of encouraging spending.”

If the government does consider more grants, they should be given to only half or 70 percent of the people unlike the first round, which went to every Korean household.

“I think it is appropriate to only give them to those that are struggling, around 50 or 70 percent,” Hong said.

He opposed proposals by several lawmakers from the ruling Democratic Party to cutting public servants’ pay to fund a second round of grants.

Over the weekend, Democratic Party lawmaker Cho Jung-hun suggested cutting government employee’s paychecks by 20 percent for four months to raise roughly 2.6 trillion won, which he said could be used for a second round of grants.

“[To do that] we would have to cut the paychecks of lower ranking employees, who account for 80 percent [of all public servants],” Hong said. “We have to consider the views of 1 million public servants and with only four months left this year, [cutting government employee paychecks] will not make a huge contribution to our financial resources."

He stressed the sacrifice already being made by government ministers and vice ministers, who have only gotten 70 percent of their pay for the last four months and government employees agreeing to a freeze in salaries next year.

The government is obviously concerned about the cost of three supplementary budgets passed this year.

The first round of relief grants cost the government 14.3 trillion won.

The government ran a budget deficit of 110.5 trillion won in the first half of this year.