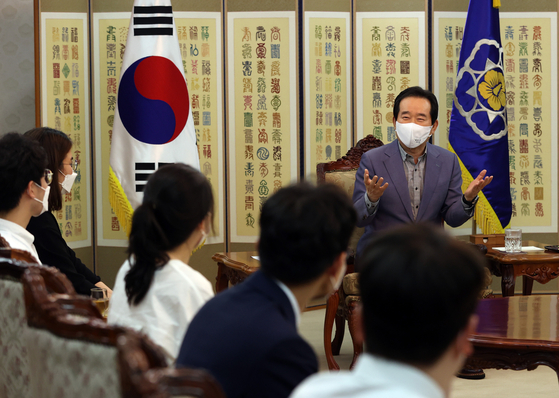 
An association of trainee doctors agreed to participate in medical services related to Covid-19 despite being on strike to protest the government’s plans to increase medical school admissions following a meeting with the prime minister on Sunday evening.

Interns and fourth-year residents first walked off their jobs Friday and all other levels joined in as of Sunday, a move which has even paralyzed some hospitals’ emergency rooms and has raised concern over the strain it would have on the provision of medical services amid a surge of new coronavirus cases in the country.

The Prime Minister’s Office said after the meeting, which lasted nearly three hours, that the trainee doctors agreed to “actively take part in medical services for responding to Covid-19,” taking into consideration the gravity of the current coronavirus situation.

Trainee doctors are not ending the strike, but reached a compromise with the government to provide Covid-19 medical services, including running testing centers and treating coronavirus patients.

The two sides also agreed to start discussions on government reform plans for the medical workforce.

“There are Covid-19 patients and families in a desperate situation; you have the great ability to help them,” Chung’s office quoted him as telling the KIRA representatives. “I am thankful for your decision today, and the government will take a corresponding measure to it.”

The KIRA representatives said that there had been “misunderstandings” on the unilateral matter that the government was pushing through with its reform plans and said that they “felt sincerity” from Prime Minister Chung.

While the most pressing concern has been addressed, the Korean Medical Association (KMA), which represents some 130,000 doctors, is scheduled to hold its second general strike between Wednesday and Friday.

Starting Monday, fellow doctors went on strike as well. Hundreds of doctors in fellowship training in major general hospitals, including 288 from Seoul National University Hospital and Seoul Asan Medical Center, walked off from their jobs.

The KMA said on Monday that the “efforts by the prime minister to hold dialogue with the young doctors is significant.”

But the association also maintained that it is “regrettable” the government is not withdrawing its medical workforce reform plans.

Prime Minister Chung and Health Minister Park held separate talks with representatives of the KMA on Monday afternoon, but were unable to bridge their differences.

“As the KMA pushes ahead with its collective strike, the patients are worried and people are anxious,” Chung said during a meeting with KMA President Choi Dae-zip Monday at the government complex in central Seoul. “We will sincerely discuss issues such as increasing the medical school admission quotas and health care policy with the medical circle with an open position.”

Choi said the two sides agreed to hold more detailed working-level talks between the Health Ministry and the KMA and that they had been able to hold “candid and sincere talks.”

Park said that there had been some "positive results" from the dialogue.

But this was not enough to withdraw the general doctors’ strike set for Wednesday.

“There is no room for doubt that the expansion of public health care is the direction we have to head in. Health care providers should also identify with this,” President Moon Jae-in said during a meeting with senior aides at the Blue House Monday.

“It is a relief that trainee doctors agreed to cooperate on essential duties related to Covid-19 treatment such as securing intensive care units, operating test centers and treating patients," said Moon. "We need to prioritize cooperation to overcome the coronavirus crisis, and I hope they can take the government’s hands after the situation stabilizes to try to find a resolution through dialogue.” 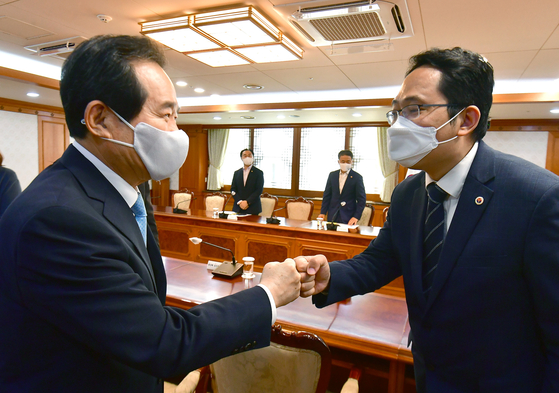