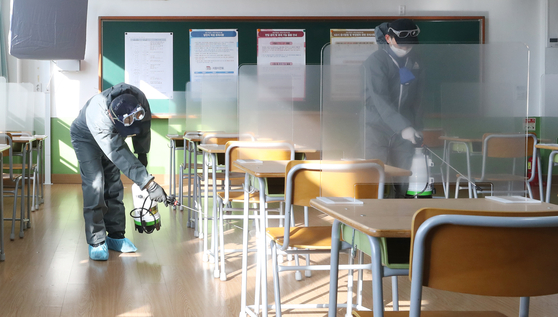 Workers disinfect a classroom at Ulsan Joongang High School in Ulsan Tuesday, two days before it will be used as a testing site for the College Scholastic Ability Test (CSAT). [YONHAP]

Daily new infections remained below 500 for a third day in a row Monday, but health authorities warned it was too early to tell whether the recent uptick in coronavirus transmissions was finally coming under control.

The Korea Disease Control and Prevention Agency (KDCA) announced Tuesday morning that the nation registered 451 new infections of the coronavirus Monday, slightly higher than Sunday’s 438 cases, but markedly lower than late last week, when there were more than 500 cases for three consecutive days.

Fewer people get tested on weekends, which naturally results in fewer positive test results, the core reason why health authorities said Tuesday they’re not getting their hopes up yet about day-to-day cases falling. 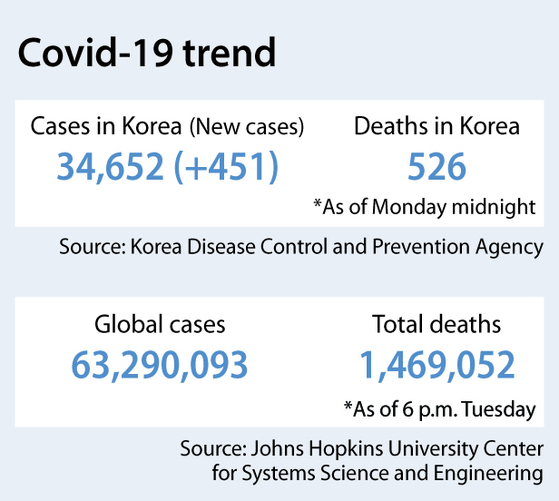 “It’s been 13 days since Level 1.5 social distancing measures were first imposed on the greater Seoul area [Seoul, Incheon and Gyeonggi] and about a week since Level 2 measures went into effect,” said Sohn Young-rae, a spokesperson for the Central Disaster Management Headquarters.

Sohn, however, pointed out that it’s a positive sign that daily cases weren’t surpassing 600.

“We were concerned we may see more than 600 and 700 cases [in a day], but we’re not seeing that, so that’s a good thing,” Sohn said. “It’s difficult to say [at the moment] whether that means the surging trend is over though."

Among Korea’s 17 major cities and provinces, Jeju Island was the only region that didn’t add a single new case Monday, according to KDCA data.

Out of 31 imported cases, 17 were from the United States, two from Russia and one each from Bangladesh, Nepal, Indonesia, Japan, Poland, Germany, Switzerland, Spain, Canada, Colombia and the Democratic Republic of the Congo.

No patients died Monday, leaving total deaths at 526, while 260 patients recovered, raising entire recoveries to 27,885. As of Monday at midnight, Korea had counted 34,652 coronavirus patients in all.

With just two days until high school seniors across the country take the College Scholastic Ability Test (CSAT), central health authorities Tuesday announced it would create a new hotline solely tasked with keeping track of all test-takers who have either caught Covid-19 or are under self-quarantine orders by their local health office due to possible contact with a Covid-19 patient. Those students will take the CSAT either in a hospital or at a remote testing site, away from other students.

Kwon Jun-wook, second vice chief of the Central Disease Control Headquarters, urged CSAT test-takers not to visit crowded spaces until the exam and stay home while relying on remote learning.