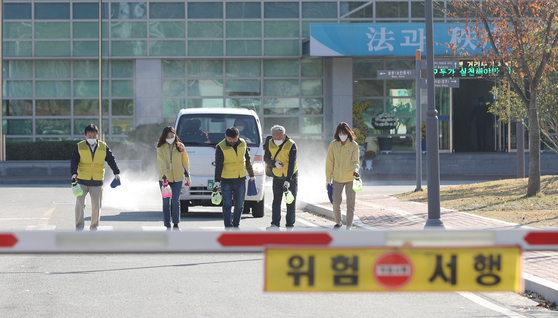 Health officials disinfect a prison in Gwangju on Monday after a worker tested positive that morning. [YONHAP]

As winter arrives and people pursue more activities indoors, concerns over the coronavirus are rising, with new daily cases remaining above 100 Sunday.

The Korea Disease Control and Prevention Agency (KDCA) announced Monday morning that 126 new Covid-19 cases were tallied nationwide Sunday, down from 143 cases on Saturday, yet markedly higher than the double-digit increases usually seen over the weekends.

Fewer people tend to get tested over the weekend compared to weekdays, which often leads to fewer positive test results.

Of Sunday’s total cases, 99 were local infections: 39 in Seoul; 21 in Gyeonggi; 11 in Gangwon; 10 in South Chungcheong; six in Daegu; four in South Gyeongsang; three in North Jeolla; two each in North Chungcheong and South Jeolla; and one in Incheon.

The rest were imported cases.

No clusters of significant size are currently being observed in the country, but health officials and experts say it’s the smaller chains of infections that have been seizing their attention lately, which are harder to trace and control.

Two clusters that recently emerged at a bar in Seodaemun District, western Seoul, and at a gym in Gangnam District, southern Seoul, were in locations found to have had poor ventilation systems, causing respiratory droplet transmissions. 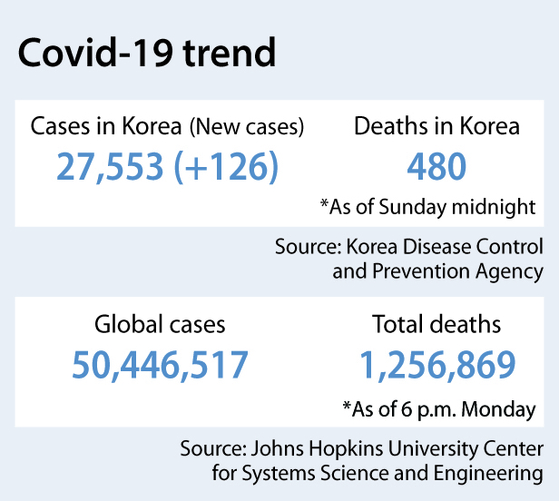 “Respiratory viruses generally tend to grow more active in environments that are cold and dry,” said Eom Joong-sik, a professor of infectious diseases at Gachon University College of Medicine in Incheon. “That’s why it’s crucial to frequently ventilate [indoor areas] with natural wind despite the chilly weather.”

The vast majority of the nation this week is subject to Level 1 measures of the new five-tier social distancing system. But health authorities said if coronavirus cases in the greater Seoul area — Seoul, Incheon and Gyeonggi — fail to drop, it may have to be elevated by a notch, to Level 1.5, next week.

City officials in Wonju, Gangwon, said Monday they would go out of their way to elevate the social distancing level to 1.5 — even though central health authorities announced last Friday the region was safe to stay at the lowest Level 1 for a week — after more people were confirmed infected with the virus.

At least 32 people in Wonju have tested positive for the virus in the past five days, said city officials, including a high school teacher. A cluster that emerged at a medical equipment sales company last Friday is continuing to grow, with at least 16 patients connected to it so far.

Meanwhile, two coronavirus patients died Sunday, bringing total deaths to 480, while 61 patients recovered, raising entire recoveries to 25,029. As of Sunday at midnight, 27,553 people had been confirmed with the virus in Korea in all.

Among 27 people who got the virus abroad and tested positive Sunday, five were from Russia, four from the United States, two each from Myanmar, India and Italy and one each from Egypt, Thailand, the Philippines, Indonesia, Switzerland, Slovakia, France, Poland, Ukraine, Britain, Mexico and Sudan.