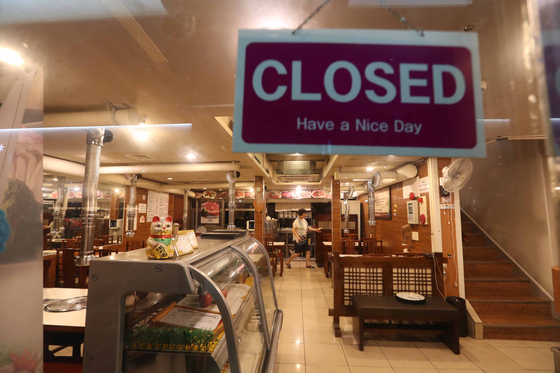 A restaurant in Jung District, central Seoul, is closed Sunday night, after new social distancing guidelines went into effect for the greater Seoul area. Restaurants in Seoul, Incheon and Gyeonggi can allow customers to eat and drink inside their stores up until 9 p.m., after which only takeout orders will be allowed until 5 a.m. [KIM SANG-SEON]

Less than four hours after Mr. Kim opened his bar in downtown Seoul on Sunday afternoon, he had to tell his customers to go home. It was 8:50 p.m., and other bars and restaurants on the street were kicking customers out as well. Day 1 of strengthened social distancing guidelines had begun, and Kim could already feel the blow.

“Sales have already dipped to a quarter of what I used to make before the pandemic,” the 30-year-old said Sunday after seeing seven customers out the door.

“This week will be even worse," he said.

The by-lanes of Jongno in central Seoul were dark Sunday night as business owners had to turn away customers at 9 p.m. in compliance with the central government’s additional measures to block coronavirus transmissions in the Seoul metropolitan area.

The new social distancing guidelines were announced last Friday, a day after health authorities announced that 441 new cases of the virus were counted Wednesday, the highest figure the country had seen in nearly six months. Seoul had its highest count ever that day as well, 154 cases.

Luckily, Korea’s daily count has been falling ever since, and reached 248 Sunday.

The central government said last Friday that while the entire nation will remain under Level 2 guidelines in the three-tier social distancing system until Sept. 6, some new restrictions will be added for the greater Seoul area starting Sunday — mostly tweaked versions of rules for Level 3.

The new rules have been dubbed by local media “Level 2.5,” and they come on top of Level 2 guidelines imposed since Aug. 16 on Seoul and Gyeonggi, and since Aug. 19 on Incheon.

Taken together, Seoul, Incheon and Gyeonggi are considered the Seoul metropolitan area, or greater Seoul.

The new Level 2.5 rules dictate that restaurants, bars, bakeries and standalone coffee shops can offer normal services — or allow customers to eat and drink inside the stores — until 9 p.m., after which they can only provide takeout until 5 a.m. At coffee shop chains, customers can’t eat or drink inside the stores at any time. Only takeout orders and deliveries are allowed.

The restrictions are scheduled to last through Sept. 6 at midnight.

“9 p.m. is just when my customers start to swarm in,” said Kim, who spoke to the JoongAng Ilbo last Sunday on the condition of anonymity.

“I’d be okay with running my business like this if I had to do it just for a week and new virus cases drop, but I think the 2.5 social distancing guidelines will be extended to last longer.”

Hong Jeong-bok, 60, who runs a sundae (Korean-style stuffed sausage) stew restaurant in central Seoul, said he, too, was expecting to see his sales plummet this week due to the additional rules. 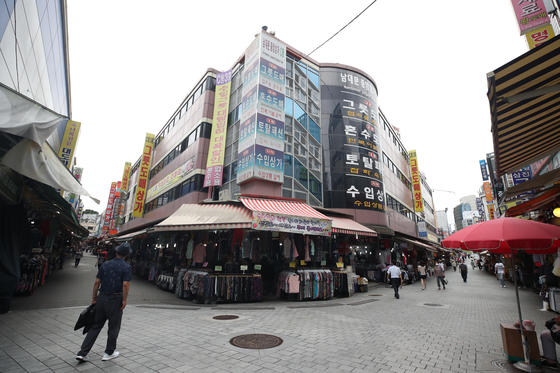 Another worker at a traditional Korean cuisine restaurant said she has been instructed by her manager how to politely evict customers at 9 p.m., but that she probably won’t have a chance to put those new skills into practice because the restaurant was already empty before the Level 2.5 social distancing guidelines went into effect.

“Ingredient prices have gone up due to the rainy season and typhoons,” she said. “I’m afraid I might be fired.”

Health authorities Monday conveyed their sympathies to small business owners like Kim affected by the new measures, stressing their “immense pain and inconvenience” was exactly why members of the general public should abide by the guidelines — so they can be lifted as planned on Sept. 6 at midnight.

Other new rules imposed on the greater Seoul area include the forced closures of all indoor sports facilities, indoor golf practicing ranges and billiard halls. Hagwon, or private cram schools, with 10 students or more can hold online classes only. Visits to nursing hospitals and nursing facilities for the elderly have also been banned.

In part of the Seoul Metropolitan Government’s so-called Halt Week campaign, which urges people to halt all nonessential social activities this week to curb the spread of the virus, the government said in a press release that most public buses in Seoul will run on wider intervals of about five minutes from 9 p.m., effective Monday.

The busiest lines, Owl Bus night rides that run past midnight and Maeul buses that usually run shorter routes, will be exempt, the city said.

Of Sunday’s 248 new cases of the virus, the Korea Centers for Disease Control and Prevention (KCDC) said Monday that 238 were local infections, while the rest were imported. 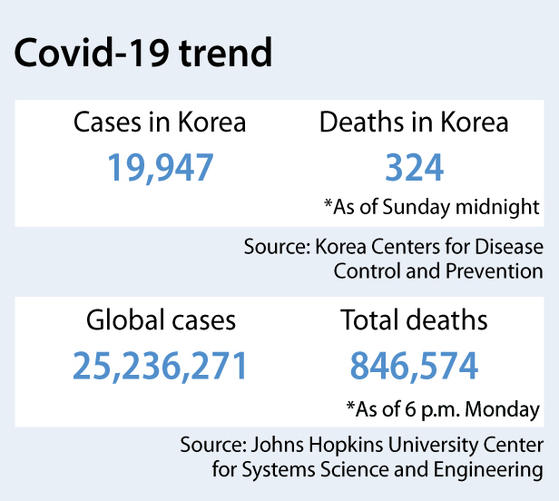 Among the local cases, 91 were reported in Seoul, 79 in Gyeonggi, 13 in Incheon, nine each in Gwangju and South Chungcheong, six in Daejeon, five each in Ulsan, South Jeolla and Jeju Island, four each in Busan and Daegu, three in Gangwon, two in North Gyeongsang and one each in Sejong City, North Jeolla and South Gyeongsang.

North Chungcheong was the only province that didn’t see a single new patient.

Out of 10 imported cases, two were from Russia and one each from Bangladesh, Indonesia, Oman, Germany, Britain, Turkey, the United States and Brazil.

By Monday noon, a cluster at the Sarang Jeil Church — a politically controversial Presbyterian church in Seongbuk District, central Seoul, where Korea’s current outbreak first began — reached 1,056 cases, of which 982 patients were identified as living in the greater Seoul area, according to KCDC data.

A separate group of 399 infections has been traced to an antigovernment rally in Gwanghwamun, central Seoul, on Korea’s Aug. 15 Liberation Day. Of that group, 214 live in the Seoul metropolitan area.