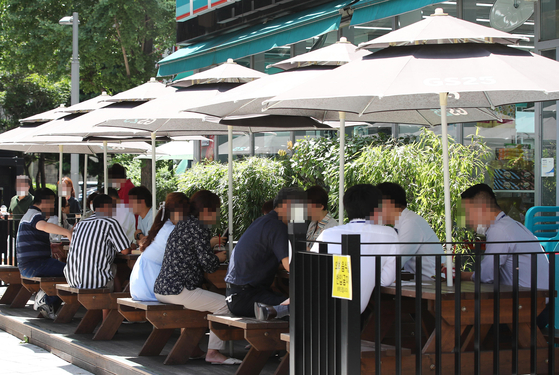 Customers drink at tables outside a convenience store in central Seoul on Tuesday. [YONHAP]

Authorities Tuesday urged people in the Seoul metropolitan area not to eat or drink at convenience stores past 9 p.m., saying they shouldn’t be used as alternatives to hanging out with friends and colleagues at bars or restaurants, no longer permissible under this week’s strengthened social distancing measures.

The warning came as the nation added 235 new infections Monday, a decrease from 248 the previous day, and in response to confusion among the general public as to whether the new social distancing measures apply to convenience stores.

The answer is that they do apply to some convenience stores — but not to all.

Korea’s central government said last Friday that while the entire nation would remain under Level 2 guidelines on the three-tier social distancing system until Sept. 6, some new restrictions would be added for the greater Seoul area — Seoul, Incheon and Gyeonggi — starting Sunday.

Those new rules were dubbed “Level 2.5,” as they come on top of Level 2 guidelines imposed on the greater Seoul area since mid-August.

The so-called Level 2.5 rules dictate that restaurants, bars, bakeries and standalone coffee shops can offer normal services — or allow customers to eat and drink inside the stores — until 9 p.m., after which they can only provide takeout until 5 a.m.

While announcing the measures last Friday, the central government said customers at “rest restaurant businesses” — the English wording when directly translated from Korean — would face the same restrictions. But it failed to spell out which types of businesses are part of that category. 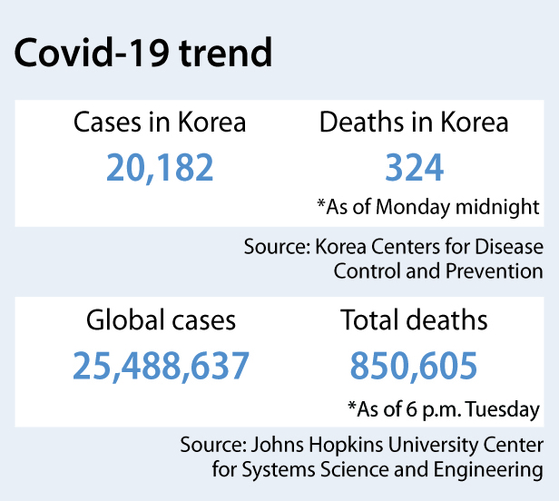 That omission gave the impression that convenience stores were excluded from the Level 2.5 measures, which led many people to flock to the stores to drink at their outdoor tables after 9 p.m.

But not all convenience stores in greater Seoul are registered as a rest restaurant business. Some are called a “free business type.” The main difference between the two is that the former has a small cooking station, where customers can microwave their purchased products or pour boiling water into instant noodle cups to eat on the spot.

Among Seoul’s approximately 13,000 convenience stores, about 75 percent, or 9,750 stores, are known to be rest restaurant businesses. In those stores, people are now forbidden to eat or drink inside the stores or at any outdoor tables after 9 p.m. under the Level 2.5 social distancing rules, although they can microwave their food or pour hot water into their instant noodles to take home.

The Seoul Metropolitan Government dismissed this distinction Tuesday and urged the public not to eat at either type of convenience store after 9 p.m., saying it was planning to make a formal recommendation to the Central Disaster Management Headquarters to cut through the confusion.

The city said it would formally ask all convenience store owners in Seoul to forbid customers from eating at their stores after 9 p.m., and carry an on-site inspection this week to check whether they follow through.

Across the nation, the Korea Centers for Disease Control and Prevention (KCDC) announced Tuesday morning that 235 new infections were detected Monday, down from last Wednesday's peak of 441.

Of Monday’s 222 local cases, 93 were in Seoul, 60 in Gyeonggi, 22 in Incheon, eight in Daejeon, seven in South Chungcheong, six in Ulsan, five in North Gyeongsang, four each in Gwangju, Gangwon and South Jeolla, three each in Busan and South Gyeongsang, and one each in Daegu, North Chungcheong and Jeju Island.

Out of 13 imported cases, three were from Indonesia, two each from Russia and South Africa, and one each from Kazakhstan, Turkey, the United States, Brazil, Ghana and Algeria

As of Monday at midnight, Korea had counted 20,182 coronavirus patients in all.