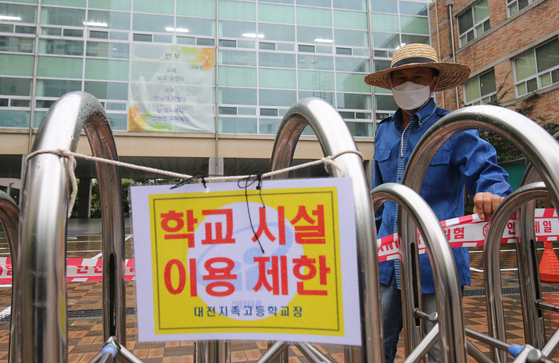 Daejeon Jijok High School in Daejeon is closed Monday after a senior tested positive for the coronavirus. [NEWS1]

When central health authorities announced late last month that indoor gyms and fitness centers in the Seoul metropolitan area would close for a week amid rising coronavirus cases, Mr. Kim was devastated. The fitness fanatic suddenly had no place to work out — or so he thought.

Last Saturday, a day before the so-called Level 2.5 social distancing measures were originally supposed to be lifted, he went to Mount Gwanak in southern Seoul, and found an outdoor fitness zone.

Now, with the restrictions in place for at least another week, Kim, who’s in his 20s and refused to give his full name for this article, said he might go there more often until his gym reopens.

“I couldn’t stand the feeling of losing muscle, so I went to the outdoor fitness zone to work out, and I went really early to have the area to myself,” said Kim.

“At 6 a.m., there were still four to five other people. The equipment is worse than what I used to exercise with at my gym and there were a lot of mosquitoes and bugs. But since the social distancing measures have been extended, I’m planning to go again.” 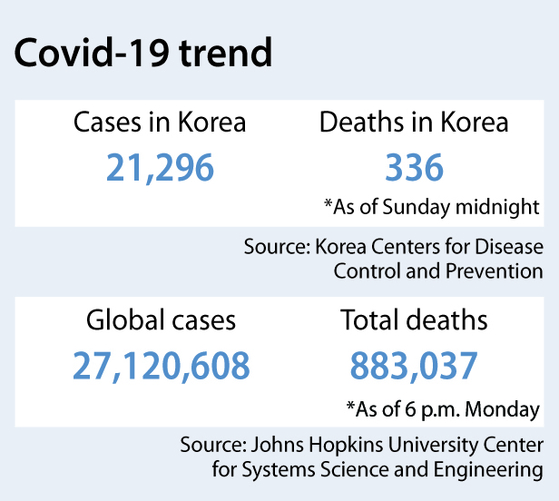 With Seoul, Incheon and Gyeonggi now in their second week of the Level 2.5 measures — and the rest of the nation subject to Level 2 measures in the three-tier system — many people like Kim have been taking their leisure and social activities outdoors, spending time alone or meeting their loved ones in open settings.

“A lot of my friends have been dating outdoors lately, like in parks,” she said. Face masks are de rigueur.

Others who wish to stay indoors with their friends but have nowhere to go are flocking to motels that provide so-called “party rooms,” where up to nearly 10 people are allowed at a time. Such arrangements are perfectly legal.

“We receive nearly 30 calls a day asking if we have any empty party rooms,” said an owner of a motel in Sincheon, western Seoul. Last Sunday, the business said all its party rooms had been booked until Tuesday.

Korea added 119 new cases of the coronavirus Sunday, the fifth day in a row that daily figures fell below 200.

Eleven cases were imported, while the rest were local cases, the Korea Centers for Disease Control and Prevention (KCDC) revealed Monday morning: 47 cases were reported in Seoul, 30 in Gyeonggi, nine in Busan, seven in Gwangju, five in Daejeon, three each in Ulsan and South Chungcheong, two in South Gyeongsang and one each in Daegu and Incheon.

Of the imported cases, three each were from the Philippines and India, two from Turkey and one each from Japan, Algeria and Kyrgyzstan.

By Sunday at midnight, there had been 162 patients who were either in serious or critical condition, and 21,296 coronavirus patients counted in all.

Several parts of the National Assembly premises in Yeouido, western Seoul, were shut down again Monday after a local news reporter covering parliamentary affairs was diagnosed with the virus earlier that day. The reporter seems to have been infected by another reporter who tested positive on Aug. 26 shortly after covering a Supreme Council meeting of the ruling Democratic Party (DP), health officials said.

The second reporter tested negative for the virus on Aug. 28 and was told he didn’t have to self-quarantine, but he felt symptoms come on last Thursday.

Several DP officials who attended the Aug. 26 meeting, including DP Chairman Lee Nak-yon, went home to self-isolate Monday upon hearing the news about the second reporter.