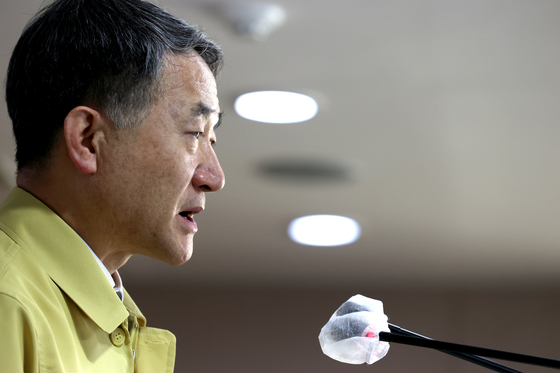 Minister of Health and Welfare Park Neung-hoo announces Friday that the so-called Level 2.5 social distancing measures for Seoul, Incheon and Gyeonggi will be extended for another week. [YONHAP]

That means Seoul, Incheon and Gyeonggi — together called the Seoul metropolitan area or the greater Seoul area — will fall under both Level 2 and 2.5 measures until Sept. 13.

Level 2.5 won’t look entirely the same as over the past week either. Health authorities added a few more restrictions.

Starting Monday, bakery, ice cream and bingsu (shaved ice dessert) chains can’t allow their customers to eat or drink inside the establishments at any time; only takeout orders and deliveries are allowed. The restrictions are the same as currently applied to coffee chains.

Some 671 vocational training institutes in the Seoul metropolitan area have to shut down as well and offer online courses only.

Other rules in the Level 2.5 system are the same.

Restaurants, bars as well as standalone coffee shops and bakeries can offer normal services — or allow customers to eat and drink inside the stores — until 9 p.m., after which they can only provide takeout until 5 a.m.

All indoor sports facilities, indoor golf practicing ranges and billiard halls will remain shut, and so will day care centers. Hagwon, or private cram schools, with 10 people or more can hold online classes only. Visits to nursing hospitals and nursing facilities for the elderly are banned as well.

In the greater Seoul area, all students in kindergarten through middle school will remain home and engage in online learning until Sept. 20. High schools will run up to a third of their total capacity.

Outside the Seoul metropolitan area, kindergarten through middle school can run up to a third of their total capacity, while high schools can run up to two-thirds.

The extensions were announced hours after health officials said 198 new cases of the coronavirus were counted nationwide Thursday, slightly up from 195 cases the previous day. It was the second time in nearly three weeks that daily infections were below 200. Most of last week saw over 300 cases daily, including a recent peak on Aug. 26 of 441.

Minister of Health and Welfare Park Neung-hoo said in a Friday afternoon press briefing that while it was a “relief” that Korea managed to stay below 200 new infections for two straight days, measures to prevent the spread of the coronavirus should be maintained nationwide.

The Central Disaster and Safety Countermeasure Headquarters said in a press release that the greater Seoul area was still seeing over 100 new cases a day, while nationwide, health officials weren’t sure how more than 20 percent of recently diagnosed patients got infected, which raises the odds of unexplained transmissions.

Among Thursday’s total infections, 189 were local cases and nine were imported.

Of the local cases, 68 were detected in Seoul, 55 in Gyeonggi, 20 in South Chungcheong, 10 in Gwangju, seven in Daegu, five in Incheon, four each in North Chungcheong and North Gyeongsang, three each in Busan, Daejeon, Ulsan, Gangwon and South Gyeongsang, and one in South Jeolla.

Out of the imported cases, two were from Russia and one each from Turkey, France, the United States, Brazil and Ethiopia.

As of Thursday at midnight, Korea had counted 20,842 Covid-19 patients in all.