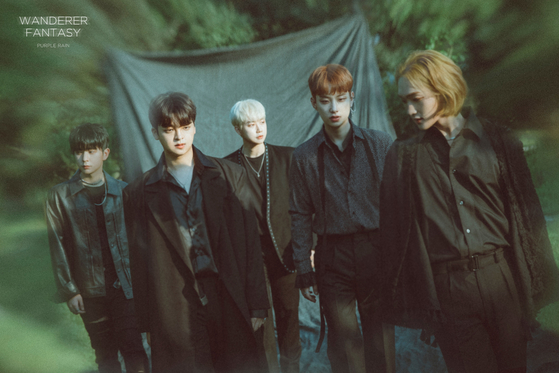 
Band Purple Rain, which gained widespread popularity after winning the KBS program “Immortal Songs” in March, has released its first regular album in hopes to provide some healing time for listeners.

The album “Wanderer Fantasy” by the group carries its desire for a miraculous change that can light up the world. All five members of the group participated in writing the music and lyrics or adjusting the tunes. The group was put together through JTBC’s program “Superband,” which had made many individual indie musicians team up with one another to show off their talents for the ultimate win. The group made it to the top 3 in the show aired last year.

After it released its first single “The King Must Die,” the group took part in “Immortal Song” in March for the first time and eventually took the win.

The main song off the album is “Miracle,” the lyrics and music of which was written by member Chae Bo-hun. The song is about hope and the desire to sing together. Chae is now serving his mandatory military duty.

The group sat down with Ilgan Sports, an affiliate of the Korea JoongAng Daily, to talk more about its first album. Below are edited excerpts.

What does it feel like to have your first album released?


Gwang-hyeon: It isn’t easy to release a regular album as a band, but I’m so pleased that we made it happen.
Ji-wan: The music we have worked on for so long has finally come out. It feels like I’m looking at a time capsule I buried before.
Na-woo: It feels like we have made a project for Purple Rain season 1. I have met fellow members after doing the music all by myself and then met the management company. [The change] was confusing, but we all made so much effort to make an album that all of us are so satisfied with.

What’s the reason for naming your album “Wanderer Fantasy?"


Na-woo: The theme that covers the album is fantasy. Since all the songs in the album carry a variety of contents, we wanted to give it a name that could represent some free wanderer. “Behind the Curtain” is like music in the film with sounds coming from classic musical instruments. This song may show the deepest and darkest shades of the group. “New World” is brighter and hopeful. “Miracle” is the most rock song and fast paced.

All members participated in making the album. Who did what?


Ji-wan: I think we go beyond the idea that a certain member does certain things. Since “Superband,” I think each and every one of us understood what we need to do as a group. Ha-jin and I did overall producing as well as working on the musical instruments we needed to have. Na-woo checked the overall sound while Gwang-hyeon got his hands on rhythm as well as lyrics. Bo-hun did music arrangement.

When have you been happiest as a group?


Gwang-hyeon: I felt accomplished the moment we got the first single, as that is not only our first but also something that could show who we are very well.
Na-woo: I’m so proud that we made an album all together.
Ha-jin: I also say the album. We all had hard times while making it, and so many people have been waiting.
Ji-wan: I think I felt accomplished when we performed on “Immortal Song” for the first time. I was thinking we understood each member better since “Superband,” and that performance was when we showed our charms as a team for the first time I think.

What is most important to you in terms of your music?


Ji-wan: It is quite difficult to elaborate with words, but I think we have made some kinds of guidelines as we work as Purple Rain.
Gwang-hyeon: I think it is important whether the general public sees us as cool. I think looking cool upon first impression is something important.

How will you cope as a band until your vocalist Bo-hun gets discharged from the military?


Ha-jin: We are preparing a lot of interesting things. I think there will be a lot you have never expected to see from us.Na-woo: We will continue working as soloists and as fellow musicians together. We will prepare music until the day we all get together as a group again.

When are you the most energized?


Gwang-hyeon: I think the cheer from the fans when you are on stage really pumps you up. I think that’s why I do music.
Na-woo: It feels like we are putting together pieces of a puzzle. As we work on making something together, we just have an abstract image of what the end result will be. When we have something good at the end, I think the ecstasy that comes with the result gives me power.

How would you define the music by Purple Rain?