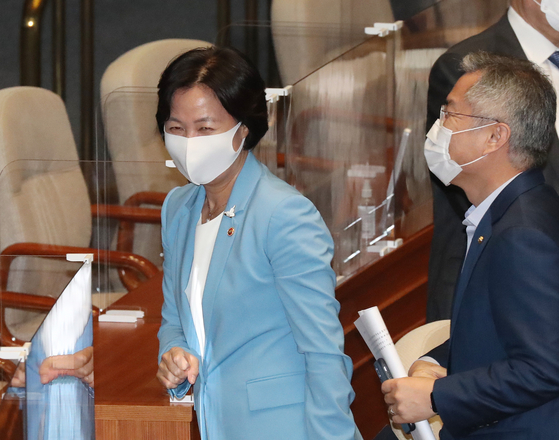 
When Justice Minister Choo Mi-ae was serving as the ruling party’s chairwoman, someone from her office asked the Defense Ministry to give preferential treatment to her son, who was doing his military service, former Defense Minister Song Young-moo told the JoongAng Ilbo on Monday.

In an exclusive phone interview with the newspaper on Monday, Song said he recently learned that the military was asked to select Choo’s son as an interpreter for the PyeongChang Winter Olympics in February 2018.

Song served as defense minister from July 2017 to September 2018, and Choo served as chairwoman of the Democratic Party (DP) from August 2016 to August 2018. She became justice minister in January 2020.

“I belatedly received a briefing yesterday that such a request had been made, but [officers in charge of the selection process] rejected it,” Song said Monday. “I was briefed that the request came from the office of the DP’s chairwoman.”

The main opposition People Power Party (PPP) has raised a series of allegations that Choo abused her power to seek special treatment for her son when he was serving his mandatory military duty. Choo’s son, surnamed Seo, served in the Korean Augmentation to the United States Army, or Katusa, for the 2nd Infantry Division of the U.S. 8th Army from November 2016 through August 2018.

In his latest revelation, PPP Rep. Shin Won-sik, a former lieutenant general who once served as deputy chief of the Joint Chiefs of Staff, said Sunday that officials in the administration and the National Assembly had tried to influence the selection process of military interpreters for the PyeongChang Winter Olympics to grant a post to Seo.

Shin quoted a former Army colonel who served as the commander of the Katusa forces at the time, as saying that he was pressured by the office of the defense minister and the liaison office of the National Assembly to dispatch Seo as an interpreter to the sporting event. The colonel said he had resisted the pressure to ensure fairness and selected 65 soldiers for the plum assignments by drawing lots.

Serving as an interpreter at a global sports event is a prestigious opportunity, which would look good on a résumé.

Song said he was briefed about what happened only after media reported about the alleged pressure.

Song said his former policy advisor, who used to be an employee of the DP, had tried to arrange special treatment for Seo.

The former policy advisor also admitted to the JoongAng Ilbo on Monday that he had been contacted by the office of then-DP Chairwoman Choo. He claimed he did not make any inappropriate request in response. “I just asked a rank-and-file level official of the ministry about the details of the selection process,” he said. “And I relayed the answer back to Choo’s office.”

He refused to say whom from the DP chairwoman’s office contacted him about the selection process.

He also said another official of Minister Song’s office had helped him. That official, however, when contacted by the JoongAng Ilbo, denied any involvement.

“He asked for my help to make Seo an interpreter, so I flatly rejected his request,” the official said. “I told him that it would be a violation of the Kim Young-ran Act[the Improper Solicitation and Graft Act].”

The official told the JoongAng Ilbo that the former policy advisor begged to get the phone number of the Katusa commander in charge of the selection process. He asked when the selection would be made. “I had the information, so I gave it to him,” he said.

While the members of the defense minister’s office told the JoongAng Ilbo different accounts, they all agreed that the office of DP Chairwoman Choo contacted the Defense Ministry directly about the selection process on behalf of Seo.

The PPP said it was clear that Choo had abused her power as the ruling party head to influence the selection process.

Choo has denied an earlier allegation that she had intervened to extend her son’s leave without going through a proper process, but she remained tight-lipped as of Tuesday about the latest allegation concerning the interpreter selection process.

The scandal over Choo’s suspected abuse of power to seek favors for her son started earlier this year, when opposition lawmakers raised a suspicion that Seo had been let off the hook when he went AWOL in June 2017. After lawmakers filed a criminal complaint in January, the Seoul Eastern District Prosecutors’ Office started a probe, but no progress has been announced.

As the probe is moving slowly, whistle-blowers started talking to the media about alleged special treatment Seo had received. Former members of Seo’s unit said Choo’s aide had telephoned the military to request an extension when Seo failed to return to duty at the end of a leave. One whistle-blower specifically said he got the call and wondered why the aide was taking care of the lawmaker’s son’s business.

Seo took a medical leave from June 5 to 14, 2017. He extended the medical leave from June 15 to 23 and spent another four personal vacation days to take a total period of 23 days off. His former fellow soldiers said he was allowed to use the four personal days when he failed to return to the base on June 23, and Choo’s office made the arrangement.

Military officials said it was unheard of for a soldier’s medical leave to be extended without returning to the unit at the end of the period and undergoing a new medical review.

Seo’s lawyers said Tuesday that Seo was governed by the regulations of the U.S. Forces Korea, not the Korean Army, because he served as a Katusa soldier. The lawyers also said the U.S. Forces Korea only keeps a soldier’s annual and sick leave records for one year, and that was why Seo’s records are no longer available.

PPP lawmakers challenged the argument. Rep. Ha Tae-keung showed Tuesday the Defense Ministry’s statement that there is no special rule applied to the Katusa soldiers about their annual leaves and sick leaves. They are governed by Korean Army regulations, equal to any other soldiers in the Korean Army, the ministry said.

“It is a complete lie that a Katusa soldier follows the regulations of U.S. troops concerning their annual and sick leaves,” Ha said. “Katusa soldiers are under the command of the U.S. military for their daily missions and participation in operations and drills, but the Korean Army is in charge of their personnel affairs.”

Ha said all records on medical leaves are supposed to be filed under Korean Army regulations, and they must be kept for five years.

Earlier in the day, PPP Rep. Yoon Han-hong said five soldiers including Seo were granted sick leaves for more than 20 days  since 2016.

Among the five, only Seo’s medical records are missing from the archive, Yoon said.

As the scandal snowballs, the PPP pressured Choo to submit to an independent investigation by a special prosecutor, because the Seoul Eastern District Prosecutors’ Office seemed unwilling to go after the justice minister.

During a National Assembly speech, Rep. Joo Ho-young, floor leader of the PPP, said Choo must submit to a special prosecutor’s probe or resign.

“It was wrong [for President Moon Jae-in] to begin with to appoint the former chairwoman of the ruling party as minister of justice, a job that requires neutrality,” Joo said.

“Why does the Seoul Eastern District Prosecutors’ Office fail to produce an outcome for its probe?” he said. “Choo once said we were writing a fiction when we first raised the suspicions against her. If so, she must submit to a special prosecutor’s investigation. If she can’t, she must step down.”

It remains to be seen if Prosecutor General Yoon Seok-youl, who has been in power struggles with Choo ever since she became justice minister in January, will order such a probe.

On Monday, Choo made clear that she wants the Seoul Eastern District Prosecutors’ Office to continue to probe the case. “I have not received any report about the probe, and I will not do so in the future,” she said in a statement to reporters, dismissing skepticism about the investigation’s integrity.