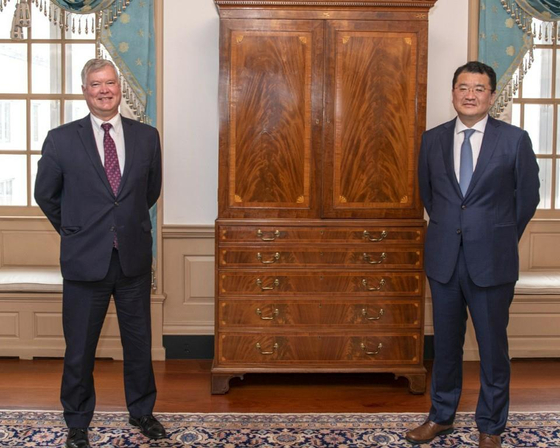 Korean First Vice Foreign Minister Choi Jong-kun, right, and U.S. Deputy Secretary of State Stephen Biegun pose for a photograph after holding a meeting at the U.S. Department of State in Washington on Thursday. [YONHAP]

“For the past 70 years, the Korea-U.S. alliance has served as the linchpin of peace and stability on the Korean Peninsula and in Northeast Asia,” Choi told reporters in Washington. “We agreed that Korea and the United States should continue cooperation and communication based on ironclad trust.”

The new consultative body, tentatively named the “Alliance Dialogue,” will be between director-general level diplomats from the two countries, said Choi.

He added, “Through this consultative channel, we plan to cooperate on diverse alliance matters at all times.”

The two countries already separately have a working group that discusses North Korea issues, including denuclearization, inter-Korean cooperation and sanctions enforcement, launched by Biegun and Lee Do-hoon, Seoul’s special representative for Korea Peninsula peace and security affairs, in November 2018. However, some critics have said that the working group impedes Seoul’s ability to pursue inter-Korean initiatives.

The new Alliance Dialogue is expected to be a separate consultative body from their bilateral working group on North Korea matters, and will deal with a different range of issues.

Biegun last visited Seoul in July, and the two sides at that time confirmed a need to “rejuvenate” the alliance.

Choi, who was on a three-day visit to the United States since Wednesday in his first trip abroad since he was named vice foreign minister last month, discussed with Biegun bilateral relations, the Korean Peninsula issue and a range of regional matters and areas of mutual interest, said Seoul’s Ministry of Foreign Affairs said in a statement Friday.

Their talks, expected to last an hour, spanned some 130 minutes.

Seoul and Washington have particularly struggled to seal a new defense cost-sharing deal after their previous 10th Special Measures Agreement (SMA) expired at the end of last year.

The two sides are “narrowing their differences” to advance defense cost-sharing talks through close communication between both the two countries’ top SMA negotiators and at the vice-ministerial level, according to the Foreign Ministry.

Biegun in a virtual forum on Aug. 31 also indicated that the United States is looking to expand its Quadrilateral Security Dialogue, or Quad, involving its regional allies Australia, Japan and India, countries considered key to Washington’s Indo-Pacific Strategy seen to be aimed at containing China amid rising Sino-U.S. rivalry.

U.S. officials have mentioned South Korea as a possible country that could be included in such an expanded Quad structure, comparable to NATO.

Washington is believed to still be extending an invitation for Seoul to join an expand Group of Seven, or G7, summit, though that meeting has been postponed because of the coronavirus pandemic.

Washington’s top diplomat likewise urged Pyongyang to return to dialogue and raised the possibility of humanitarian assistance to deal with the Covid-19 pandemic and economic challenges amid a standstill in denuclearization talks, despite U.S. President Donald Trump and North Korean leader Kim Jong-un still appearing to be on friendly terms.

“We then hope we can one day again have a serious conversation to convince Chairman Kim that the best thing to do for the people of North Korea is to fully denuclearize and that that will lead to a brighter future for the North Korean people,” U.S. Secretary of State Mike Pompeo said in an interview with Fox News Wednesday.

Pompeo said he hopes to "get humanitarian assistance there to assist them against that set of challenges.”

The post is considered as damage control by some ahead of a new book, “Rage,” by acclaimed journalist Bob Woodward which discloses parts of peronsal letters exchanged between Trump and Kim.