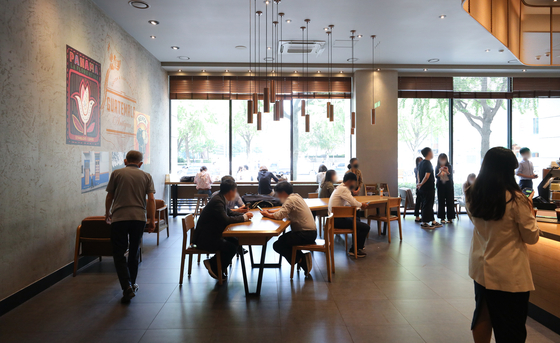 Customers return to a coffee shop chain in downtown Seoul on Monday, the first day after the so-called Level 2.5 social distancing measures were lifted for the greater Seoul area. [NEWS1]

A coalition of noraebang (singing room) owners in Seoul, Incheon and Gyeonggi slammed the government for forcing their businesses to remain shut while allowing restaurants and coffee shops to resume normal operations. They vowed to seek compensation for financial losses and file a complaint against the Korea Disease Control and Prevention Agency (KDCA) for dereliction of duty.

The threat came as Korea added 109 new cases of the coronavirus Sunday, down from 121 the day before, the 12th consecutive day that daily infections hovered between 100 and 200.

A slew of restrictions that impacted the daily lives of Koreans residing in Seoul, Incheon and Gyeoggi — together called the greater Seoul area or the Seoul metropolitan area — were finally lifted on Sunday midnight after two weeks, as central health authorities admitted the measures were heightening “social fatigue” among the general public.

The plight of owners of restaurants, bars, bakeries, coffee shops, fitness centers and hagwon (private cram schools) that were either forced to close or make serious alterations to their services — leading to plunges in sales — were another critical factor in why the Level 2.5 restrictions were lifted.

Yet health authorities said Sunday that Level 2 measures in the three-tier social distancing system would remain in place for two more weeks in the greater Seoul area, a week longer than the rest of the country. 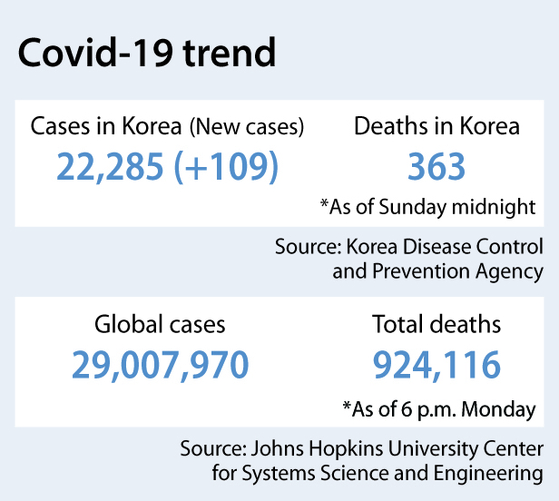 Under Level 2, any private or indoor gatherings involving 50 people or more, or outdoor meetings involving 100 people or more, are banned. Eleven types of businesses that are deemed to have high risks of virus transmission are closed, including clubs, bars that involve dancing or table-hopping, door-to-door sales businesses, buffets and noraebang. Public institutions such as museums and libraries are also shut down.

A 61-year-old noraebang owner surnamed Kim, who wished not to be identified by his full name, said he was “reaching his limit.”

“How do you really define ‘high risk’?” he asked, saying the government’s criteria for categorizing high-risk businesses were vague. After a month of forced closure, Kim said he was making ends meet by working half-time at a gimbap (seaweed rice roll) store, earning minimum wage.

The Seoul Metropolitan Government said Monday that city buses that have run at longer intervals after 9 p.m. from Aug. 31 will return to their normal schedules. But restrictions on some of the most popular parks along the Han River will stay in place in order to prevent people from mingling in groups, the city said, affecting the river parks of Yeouido, Ttukseom and Banpo.

Of the 109 new cases Sunday, 98 were local infections, including 41 in Seoul, 30 in Gyeonggi, 10 in Incheon, seven in South Chungcheong, three each in Busan and Gwangju and one each in Daegu, Daejeon, Ulsan and South Gyeongsang.

Out of 11 imported cases, six were from Uzbekistan, two from the Philippines and one each from India, Qatar and Myanmar.

As of Sunday at midnight, Korea had counted 22,285 coronavirus patients in all.