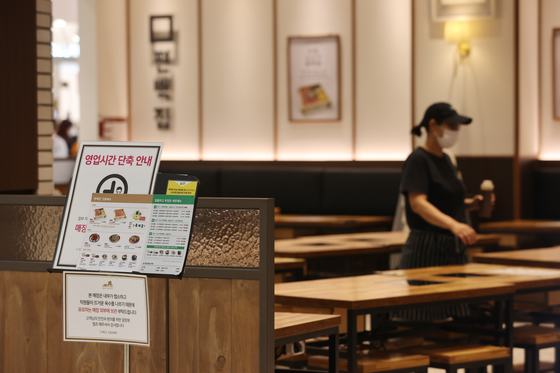 A restaurant in a shopping mall in Yeongdeungpo District, western Seoul, sits empty Sunday as central health authorities announced the social distancing level of the greater Seoul area would be raised to Level 2.5. [YONHAP]

Health authorities Sunday announced that the social distancing level for the Seoul metropolitan area would soon be raised by another notch to Level 2.5, as daily coronavirus cases surpassed 600 for the second time in nine months.

The new Level 2.5 restrictions will be applied to Seoul, Incheon and Gyeonggi — together called the Seoul metropolitan area or the greater Seoul area — for three weeks, though health officials did not immediately reveal when the measures will go into effect.

That will likely be revealed in a press briefing later this evening.

Level 2.5 is the second-highest level in the five-tier social distancing system. It’s the first time the Korean central government has imposed Level 2.5 measures on a region since the three-tier scheme was replaced by the current five-tier scheme in early November.

Most of the rest of the country is currently under Level 1.5. Health officials are expected to announce in the evening press briefing whether their social distancing levels will be raised as well.

Under Level 2.5, more businesses will have to close including indoor gyms and noraebang (singing rooms). Clubs and other bars where customers dance and table-hop were forced to close under Level 2, and they will remain closed in Level 2.5. The number of guests at weddings will be capped at 49, and internet cafes, theaters, arcades, and study rooms have to close at 9 p.m. Restrictions on coffee shops and restaurants will be the same as Level 2 — cafes are only allowed to provide take-out services throughout the entire day, while restaurants can offer normal indoor services up until 9 p.m., after which only take-out will be allowed.