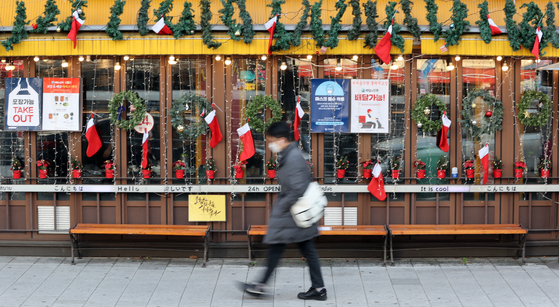 A pedestrian passes a restaurant decorated with Christmas ornaments in the neighborhood of Hongik University in Mapo District, western Seoul, on Monday. As the Level 2.5 social distancing measures are imposed in the capital area, shopkeepers worry that year-end revenues will vanish. [YONHAP]


Over 50 people linked to a hospital for the elderly in Ulsan were diagnosed with the coronavirus Monday as daily infections exceeded 600 for the second day in a row.

Of those 91 cases, 68 were identified as patients who had been hospitalized, 10 as caregivers and 13 as other employees. Health officials said the oldest patient was over 100 years old.

How the virus got into the hospital is still a mystery.

A former caregiver who used to work at the hospital first tested positive Sunday morning, prompting others at the hospital to get immediately tested. Dozens turned out positive.

Ulsan health officials, however, said they weren't sure she was the first person to have actually caught the virus in the cluster. The former caregiver's last day at work was Nov. 30.

Officials said chances seemed low the virus was brought by a visiting relative of a hospitalized patient because patients were only allowed to interact with loved ones through a transparent plastic curtain.

The entire 10-story hospital has been placed under cohort isolation — the shutting down of a building to prevent the spread of the virus.

In Goyang, Gyeonggi, two nursing homes also saw at least 24 new infections combined Monday, raising one cluster to 31 and the other to 19.

Health officials Monday warned that recently compiled data indicated the country was likely to see some 550 to 750 new patients per day this week — and possibly more than 900 next week.

"If [people] no longer socially distance, we could see more than 1,000 new patients in a single day," Na Seong-woong, a spokesperson for the Central Disaster Control Headquarters said in an online briefing.

"If we don't curb this spread now, it could go full blown nationwide. In that case, the last straw would be to entirely restrict people's social activities." 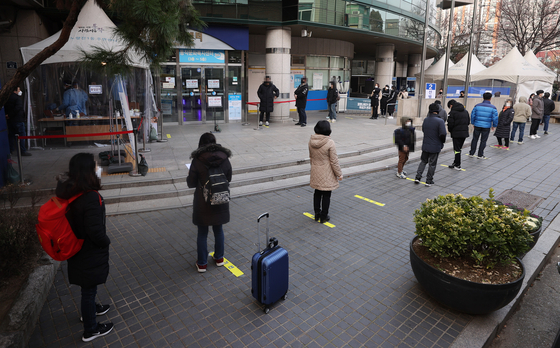 
Out of 615 people who were diagnosed with Covid-19 Sunday, 580 were due to domestic infections — 231 in Seoul, 154 in Gyeonggi, 38 in Ulsan, 37 in Incheon, 33 in Busan, 21 in North Jeolla, 15 in South Gyeongsang, 11 in North Chungcheong, 10 in South Chungcheong, nine each in Gangwon and North Gyeongsang, five in Daegu, three in Gwangju and two each in Daejeon and South Jeolla.

Of the country's 17 major cities and provinces, Sejong City and Jeju Island were the only regions that didn't add a single new case.

The remaining 35 new patients represented imported cases — 11 from the United States, nine from Russia, three from Switzerland, two each from Turkey and Myanmar and one each from the Philippines, Indonesia, the United Arab Emirates, France, Britain, Hungary, Bulgaria and Canada.

Four patients died Sunday, raising total deaths to 549, while 173 patients recovered, bringing recoveries to 29,301. As of Sunday at midnight, Korea had counted 38,161 coronavirus patients in all.

Officials said the spread in Seoul was especially dire, as the capital registered more than 200 new infections in a day for five days straight. 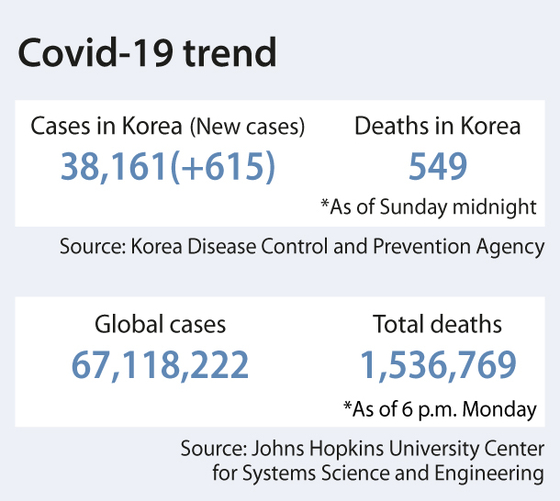 Acting Seoul Mayor Seo Jung-hyup said in a KBS radio show Monday morning that the city's last straw was going into Level 3 social distancing restrictions, which would technically look like a "lockdown."

"The worst-case scenario would unfold in Level 3 because the economy and citizens' everyday lives would come to an all-stop," Seo warned. "We must prevent ourselves from going into Level 3."

Seo mentioned only five out of 62 hospital beds for critically ill patients in Seoul were currently available. For patients with light or zero symptoms staying in one of eight so-called life treatment centers, only 186 beds were available, Seo said, adding the city was working towards securing more beds throughout the coming days.

For starters, Seo said each of Seoul's 25 districts will establish a life treatment center this week to accept new patients within their jurisdictions.

Starting Tuesday, the greater Seoul area will be subject to Level 2.5 social distancing restrictions while the rest of the nation will fall under Level 2 rules, though each local government office will have some wiggle room to lower or elevate their levels after consultation with the central government, if they wish.

Level 2.5 is the second-highest level among the nation's five-tier social distancing system. The highest level is Level 3.

Under Level 2.5, indoor gyms, billiard halls and noraebang (singing rooms) will have to close. Clubs and bars where customers dance and table-hop were forced to close under Level 2, and they will remain closed under Level 2.5.

Restrictions on coffee shops and restaurants will be the same as Level 2 — cafes are only allowed to provide take-out services throughout the entire day, while restaurants can offer normal indoor services up until 9 p.m., after which only take-out will be allowed.

Any gatherings of 50 people or more will be banned, which means weddings have to cap their guests at 49.

Hagwon (private cram schools) will specially be subject to Level 3 restrictions, meaning they can't gather for in-person lessons at all. Those that are currently offering lessons for high school seniors preparing for interviews or written tests for college admissions, however, will be subject to Level 2.5 restrictions, which means they can provide in-person lessons until 9 p.m. The same exemption will be offered to vocational training centers.

Schools have to run at a third of their capacity. Middle and high schools in Seoul, however, were specially ordered by the Seoul Metropolitan Education Office to start a two-week remote learning period Monday.

Spectators will be banned at professional sports games and all religious activities must be carried out virtually. Companies will be strongly recommended to allow at least a third of their workforce to work remotely.

In a meeting with senior secretaries and aides Monday at the Blue House, President Moon Jae-in called on authorities to double down on Covid-19 preventive measures as if it's their last chance to curb the spread, and apologized to the public for causing inconvenience with the upcoming Level 2.5 restrictions.