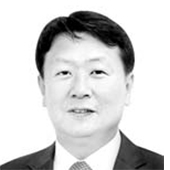 Key members of the Moon Jae-in administration seem to be very skillful at using ambiguous expressions to distract people’s attention from the core of an issue. One example is a recent remark by Unification Minister Lee In-young that “Korea-U.S. relations should be changed from an alliance of cold war to an alliance of peace.”

At first glance, his remarks sound convincing, but they are based on two wrong arguments. First, he is saying that the Korea-U.S. alliance is a relic of the era of ideological confrontation of the Cold War and should be ended. Second, he is saying that the future relations of the two countries must focus on promoting peace without their military alliance. He is either ignorant of the true nature of the alliance or distorting the truth intentionally.

An alliance is naturally connected to the possibility of armed conflict such as a war. Allies pledge to help each other militarily when they face an armed conflict with an enemy. What does Lee mean by an “alliance of peace”? It doesn’t really make sense.

An alliance is a security strategy with a long history. When you form an alliance, you can have enormous reinforcements to counter an enemy invasion even if your military power is weak. This is also a great business for a country. That is why almost all countries in all times established various types of alliances.

Of course, an alliance comes with a price. You can be dragged into an unwanted dispute by your ally. Intervention by an ally is troublesome too. It is a more serious problem in an asymmetrical alliance between a superpower and a small country.

Korea had faced various interventions from the United States at turning points of its history. Korea has been barred from building nuclear weapons and increasing the ranges of its missile because of U.S. insistence. But Washington’s interventions are not all necessarily bad. It was the Central Intelligence Agency (CIA) that saved Kim Dae-jung when he was about to be killed by the South Korean government in 1973. 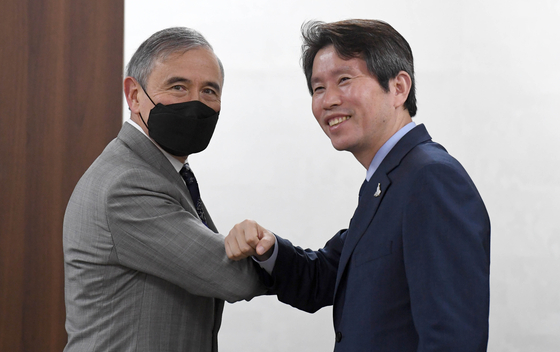 Unification Minister Lee In-young meets U.S. Ambassador Harry Harris at his office in Seoul on Aug. 18. Lee said that Korea-U.S. relations should be changed to an alliance of peace. [KIM SANG-SEON]

An alliance’s value should be evaluated by looking at the overall gains and losses, even if it is a relationship where national security is guaranteed in return for some interventions. The liberals have been complaining that the United States intervened in the affairs of Korea, including the issue of unification, and they are right. But it is a risky idea to reduce the Korea-U.S. military alliance, which has to be strong and firm, into the kind of alliances we see in peaceful Northern European countries. That would be suicide.

The 67-year Korea-U.S. alliance is a precious asset. It has built up trust between the two countries. Even after the fall of the Soviet Union, the North Atlantic Treaty Organization was maintained thanks to the trust built among allies. In addition to mutual military support, there are many things a strong alliance can accomplish.

Some say the alliance is not necessary as South Korea’s military capabilities are far superior to those of North Korea due to the huge economic gap between the two countries. But that’s only right if North Korea did not have nuclear weapons. According to research by the Hansun Foundation for Freedom and Happiness last year, North Korea’s military capability is nearly twice that of South Korea if the North uses nuclear weapons for a short-term war when the South is not under the U.S. nuclear umbrella.

Why is Minister Lee promoting an alliance of peace? Because he does not see the North’s nuclear weapons as a threat. Or else, it is unthinkable for him to question it.

Vice Foreign Minister Choi Jong-kun recently mentioned the need for a new dialogue between director-level officials of the Foreign Ministry in Seoul and the State Department in Washington. Two years ago, the United States led an initiative to create a working group to discuss inter-Korean affairs, but that mechanism isn’t working smoothly. If Seoul proposes a similar group, Washington won’t like it.

International relations are a living organism, like domestic politics. The Korea-U.S. alliance needs to be adjusted as the gap between national powers of the two has narrowed compared to the past. But we mustn’t allow any dilution of the alliance amid the threat of the North’s nuclear weapons.

An “alliance of peace” North Korea A working group

A tragedy of errors