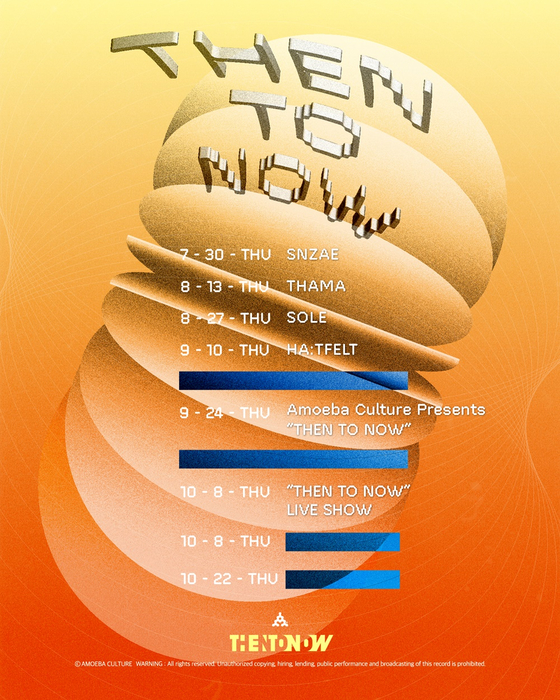 The poster for Amoeba Culture's "Then To Now" project. [AMOEBA CULTURE]


Entertainment agency Amoeba Culture will release a new album in collaboration with saxophonist and songwriter Kim Oki's team Kim Oki Saturn Ballad, rewriting some of the most popular songs previously released by the agency's artists.

According to the agency, the new album "Then To Now" will drop on Sept. 24 as a part of the agency's ongoing 15th year anniversary project of the same title, for which the artists of Amoeba Culture have been releasing new music for since this summer.

"Then To Now" will have the songs from Amoeba's past rewritten in a jazzy vibe with saxophones, piano and double bass. The songs that will be rearranged have not been revealed yet.

Kim Oki is a renowned modern saxophonist who was awarded the best performance award in the jazz and crossover category at the 2014 Korean Music Awards.

Kim Oki Saturn Ballad consists of Kim Oki as the lead saxophonist, as well as songwriter and jazz pianist Chin Soo-young and bassist Jung Su-min. It rearranged all the songs in the album.

"Then To Now" project began on July 30 with singer Snzae's new song, followed by new music from Thama, Sole and recently, HA:TFELT.

Gaeko ropes in his wife to perform on 'Little Treasure'