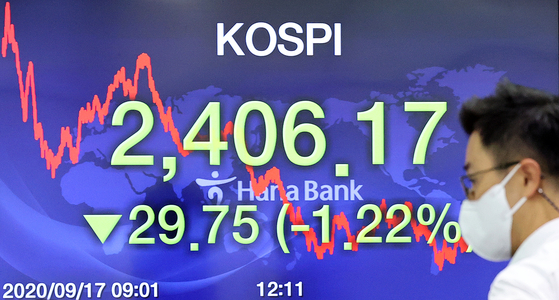 A screen shows the closing figure for the Kospi in a trading room at Hana Bank in Jung District, central Seoul, Thursday. [YONHAP]


Stocks decreased more than 1 percent Thursday as investors turned to profit-taking and worried about tech valuations. The won rose against the dollar.

The Kospi dropped for a second straight session on profit-taking.

Despite the U.S. Federal Reserve's signal to keep the near-zero rate until 2023, the local stock market remained bearish.

"The fact that the FOMC [Federal Open Market Committee] did not signal additional asset buying seems to have disappointed investors who hoped for larger liquidity in the markets," Bookook Securities researcher Lee Won said.

The local currency closed at 1,174.4 won per dollar, down 1.7 won from the previous session's close.