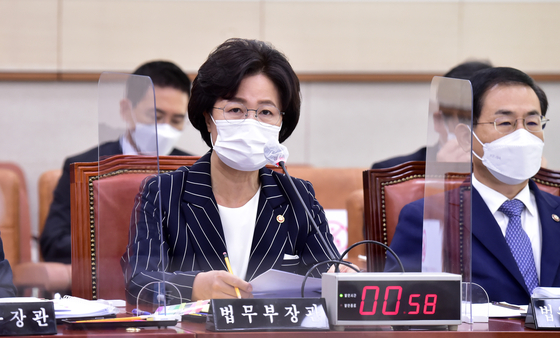 
Prosecutors said Tuesday they raided the home and office of Justice Minister Choo Mi-ae’s son as they investigate allegations that he received preferential treatment when he served the military in 2017.

The Seoul Eastern District Prosecutors’ Office said the raids targeting Choo’s 27-year-old son, surnamed Seo, happened on Monday, while on Saturday they raided the homes of a former military captain and a former aide to Choo for their suspected roles in the scandal.

Choo and her family have been battling allegations that Seo received special treatment when he was serving in the Korean Augmentation to The United States Army, or Katusa, from November 2016 through August 2018. At the time, Choo was the chairwoman of the ruling Democratic Party (DP).

Several whistle-blowers have alleged Seo was let off the hook when he failed to return to base at the end of a sick leave in June 2017, which had already been extended once. Suspicions were raised that Choo or her husband had called on the Ministry of National Defense to get a second extension, and Seo was subsequently allowed to use personal days. Choo has consistently denied the accusations.

Choo's aide at the time is also suspected of having contacted the military to extend the leave. Choo said she has not checked with the aide about the allegation.

According to the sources in the prosecution, the captain and Choo’s aide had at least three phone conversations between June 5 and 27, 2017. They believe the phone talks were to arrange an extension for Seo’s leave.

The prosecution has recovered their call and text message records to see if they had additional contact. Prosecutors are also looking into the possibility that other people were involved in the unusual extension of leave.

Meanwhile, Choo generated fresh controversy on Monday in a hot mic moment, in which she used blunt language to characterize an opposition lawmaker who has raised suspicions about her son’s military service for months.

Choo attended the National Assembly’s Legislation and Judiciary Committee meeting on Monday evening. After opposition lawmakers grilled Choo about the allegations concerning her son, the committee went into recess around 7:37 p.m. Choo, then, had a conversation with Defense Minister Suh Wook, who was sitting next to her.

Although microphones in front of the two ministers were turned off, Choo’s voice was still aired live on the National Assembly’s broadcasting system.

“I am dumbfounded,” Choo responded. “It is good that he is now a lawmaker, not a prosecutor. He must have framed many innocent people.”

Choo was referring to Rep. Kim Do-eup, chief negotiator for the People Power Party (PPP) on the committee and a former prosecutor. Earlier during the session, Kim raised new suspicions about Choo’s son. Kim accused the Ministry of National Defense of having tried to conceal the fact that outside pressure was placed on the military to select Seo as a military interpreter for the 2018 PyeongChang Winter Olympic Games.

After Kim’s remarks, the committee went into recess and Choo criticized him in the hot mic blunder.

When the committee resumed its session, the PPP strongly criticized Choo. Rep. Yoo Sang-bum of the PPP told Choo that it was not her first hot-mic gaffe.

During a July 27 session of the Legislation and Judiciary Committee, Choo jeered at PPP Rep. Yoon Han-hong, who had raised suspicions about Choo’s son. “Go write a novel,” Choo said at the time, prompting angry responses from the opposition lawmakers.

“You must remember the chaos after your [July] remarks,” Yoo told Choo on Monday. “How dare you insult a lawmaker because you don’t like his question?”

Choo responded, “I offer an apology for the smooth continuation of this committee meeting.”