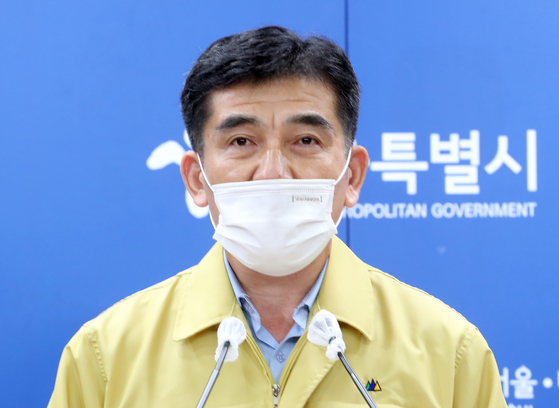 
The Seoul city government sued the Sarang Jeil Church and its head pastor Friday for some 4 billion won ($3.4 million) in damages related to the coronavirus cluster connected to its adherents.

“Because the church and its pastor Jun Kwang-hoon stalled the city government’s response to the viral outbreak connected to the church by submitting fake records and broke other parts of the Infectious Disease Control and Prevention Act, Korea is back to battling another surge of Covid-19 cases,” the city government said in a statement Friday.

At least 1,168 patients have been traced to the church cluster as of Thursday, according to the Korea Disease Control and Prevention Agency (KDCA). It is the second-largest cluster Korea has seen. The largest was connected to the Shincheonji Church of Jesus, whose members and people related to them accounted for over 5,000 cases in Korea since their cluster began in February.

Korea’s daily cases hovered around the 20s in early August but spiked over 100 after Aug. 12, the day the first infection was discovered at the Sarang Jeil Church, a Presbyterian church in Seongbuk District, central Seoul.

A weekend rally in Gwanghwamun Square in central Seoul on Aug. 15, in which many members of the church and Jun took part, sparked another cluster. Some 609 cases have been traced to the rally as of Friday at noon.

The city government said it filed a suit demanding compensation from the church and Jun with the Seoul Central District Court on Friday afternoon.

The city government said that damages connected to violations of the law by the church and its pastor amount to 4.6 billion won.

They include the city government’s partial coverage of treatment of Covid-19 patients in Seoul; the operation costs of community treatment centers for Covid-19 patients with mild symptoms; and the losses incurred by public buses in Seoul amid heightened levels of social distancing measures implemented in Seoul since the spike in cases in the city, a majority of which have been traced to the church.

“The church and its pastor risked the safety of everyone in Seoul,” said Cho In-dong, deputy mayor of Seoul for planning and coordination, in a statement on Friday. “We will be doing our best to provide evidence for our claims on compensation.”

The church issued a statement via its lawyers on Friday saying the government should sue China instead.

“The so-called ‘Wuhan virus’ came from China,” the statement read. “The national government had better report China to the court.”

Korea recorded an additional 109 domestic cases and 17 imported cases on Thursday, according to the KDCA.

Of the 17 imported cases, four were from Uzbekistan, four from the United States, and one each from countries including Bangladesh, the Philippines, Kyrgyzstan and Indonesia.