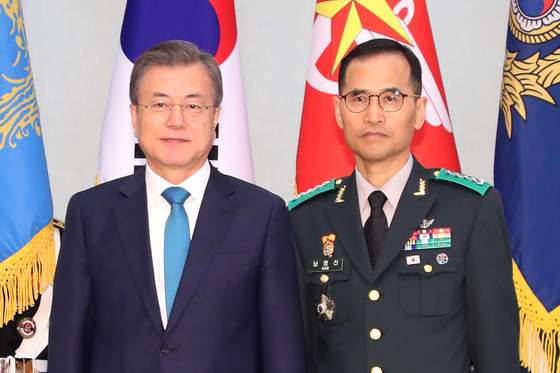 President Moon Jae-in, left, and Gen. Nam Yeong-shin, who was nominated Monday as Korea's next Army chief of staff, at Nam's appointment ceremony to be head of the Ground Operations Command in April last year. [YONHAP]


Four-star General Nam Yeong-shin was nominated as Korea’s Army chief of staff Monday, making him the first commander of the country’s land forces in a half-century not to have been trained at the influential Korea Military Academy (KMA).

Nam, 58, will also be the first Army chief of staff from the Reserve Officers’ Training Corps (ROTC), according to the Ministry of National Defense on Monday, which said it made the selection based solely on merit and character rather than background and schooling.

Since its foundation in 1948, the Korean Army has never been led by an ROTC figure. For 51 years since 1969, the position has been filled by generals from the powerful KMA, whose members effectively ruled the country through military juntas headed by generals-turned-Presidents Park Chung Hee and Chun Doo Hwan.


Nam’s nomination is part of a recent major reshuffle of Korea’s top brass, which has so far been nothing short of radical in terms of the number of conventions it's broken.

Incumbent President Moon Jae-in, who was part of a massive civic movement that prompted military rulers to devolve power to civilian hands in 1987, swore early in his term to break down entrenched military traditions that have buttressed the KMA’s continued dominance.

It was in such a context that Moon pushed through the appointments of Song Young-moo and Jeong Kyeong-doo, who headed the Navy and Air Force, respectively, as his administration’s first and second defense ministers.


Moon’s choice for Jeong’s successor, Gen. Suh Wook, earlier this month was ostensibly a conventional one, given Suh’s background as Army chief of staff and a KMA graduate.

But the president also appointed Air Force Chief of Staff Won In-choul, who belongs to a graduating class a year ahead of Suh, as chairman of the Joint Chiefs of Staff (JCS).

It is rare in the Korean military that a figure from a junior class is appointed above an older officer, and the move was interpreted as the Blue House’s attempt to check the KMA's influence over the armed forces.

The intent has been made even more clearer with Nam’s nomination, given that the general became an officer the same year as Suh did.

Nam’s military career also testifies to why he has been chosen to head the Army in spite of the controversy his selection may generate among his KMA-trained subordinates.

Before he was appointed head of the Army’s Ground Operations Command in April 2019, Nam oversaw a major overhaul of the military’s counterintelligence arm, the Defense Security Command, after it was implicated in a plot to wrest power from civilian hands if former President Park Geun-hye had not been removed from office in 2017.


Nam has been credited with leading the transition and reform smoothly as the first commander of the newly formed Defense Security Support Command.