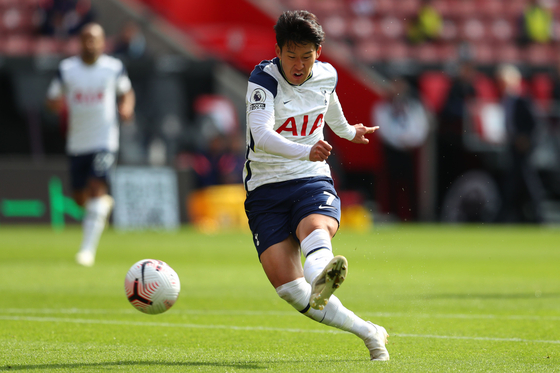 
Son Heung-min of Tottenham Hotspur made history again on Sunday, becoming the first-ever Korean footballer to score a hat trick in the English Premier League (EPL).

If that wasn't enough, Son became the 28th player in the history of the EPL to score four goals in a single game during the match against Southampton on Sunday, and he did it with just four shots on goal.

Southampton opened the scoring with a goal from Danny Ings in the 32nd minute in the midst of a relatively quiet half for Spurs. Son’s equalizer came in the last moments of the second half, putting the score at 1-1 going into the break.

Son became only the second Asian player — after Shinji Kagawa for Manchester United back in 2013 — to score a hat trick in a Premier League match.


“I think it’s a great honor for me,”  Son told Spurs TV after the match. "[Scoring] Spurs' first goal [of the season] and scoring [my] first hat trick, [in the] Premier League, with Spurs."

Harry Kane then added a fifth goal in the 82nd minute to give Spurs a 5-1 lead. A penalty from Ings in the 90th minute gave Southampton one consolation goal to end the game at 5-2.

Son is the 28th player ever to score four goals in the Premier League era, joining the venerable company of Premier League legends such as Alan Shearer, Michael Owen and Thierry Henry, and more recently Luis Suarez, Sergio Aguero and Spurs’ own Kane.

Son is the only Korean footballer to ever achieve the feat. In fact, Son became the first Asian player to ever score four goals in one game in any of Europe's top five leagues — the EPL, Germany's Bundesliga, France's Ligue 1, Italy's Serie A and Spain's La Liga.

Son wasn’t the only Spurs player to enter the history books during Saturday’s game. With four assists, one for every one of Son’s goals, Kane became the seventh player ever to pick up four assists in an EPL game.

Kane is the first player ever to assist the same teammate four times in one match.

Although he rained down goals throughout the second half of the match, Son felt that his equalizer at the very end of the first half was the most important of all.

Although Son’s four goals made the headlines, Son himself and head coach Jose Mourinho were quick to point out Kane's role in the match.

“I know that everyone will say Sonny is Man of the Match because it’s an incredible achievement to score four goals in the Premier League,” Mourinho was quoted as saying on Spurs' website. “But I am a team coach, I am all about my team and what Harry did for us is an example of the guy who is not going to have the highlights on him, but is fundamental for the team.”

"I’m grateful for having this opportunity and grateful for the teammates and especially to Harry,” Son said to Spurs TV. “He’s amazing, amazing performance from him. He’s an amazing person.”

Statistically, Son and Kane really are shaping up to be the perfect pair on the pitch. Since August 2015, when Son joined Spurs, the two have teamed up on 24 Premier League goals, more than any other duo in the league over the same time period.

With the win, Spurs are ranked sixth in the Premier League standing with a win and a loss, totaling three points. Despite Spurs’ struggle in the first half of the match, Son expressed his satisfaction with the win.

“Obviously we struggled in the first half but a win is a win," Son told Spurs TV. "In the second half, we bring [a] really, really strong performance. The performance, we have to bring it from the start. We have to control the game and dominate the game from the start. Obviously, we have to learn this. Now, it’s the start of the season, moving forward, we are looking to be better and better.”

Son was already looking good before the season started last week. Prior to the start of the 2020-21 season, Son seemed to be in perfect shape in the pre-season friendlies.

He started off by scoring two goals during Spurs’ first friendly match against Ipswich Town on Aug. 22.

Then, against Reading on Aug. 28, Son scored another in the 39th minute to help Spurs pick up a 4-1 victory in their second friendly. Not only was Son able to score in two straight matches, but his goal against Reading also marked the fifth anniversary of the day he signed with Spurs.

Son was back in action in Spurs’ third friendly against Birmingham on Aug. 29. Spurs won the match 1-0, although Son didn't score. Spurs lost their last friendly against Watford 2-1, but Son once again managed to score and for the first time in his career with the Premier League club, he wore the captain’s armband.

Spurs will continue its season with a third round match of the EFL Cup against Leyton Orient on Tuesday.

The London club's Premier League campaign will continue on Sunday against Newcastle at Tottenham Hotspur Stadium.