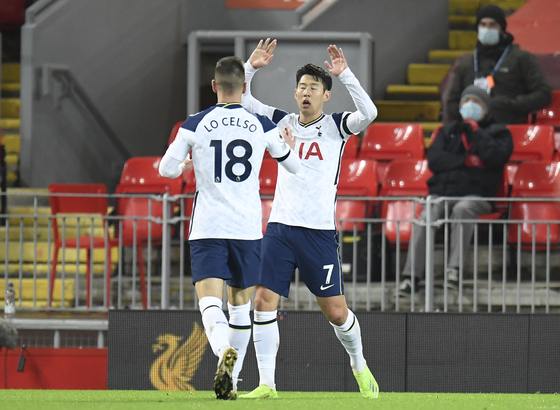 Son Heung-min of Tottenham Hotspur, right, celebrates with teammate Giovani Lo Celso after scoring a goal during the English Premier League match against Liverpool at Anfield on Wednesday. [AP/YONHAP]


Tottenham Hotspur may have lost the top spot in the English Premier League (EPL), but Son Heung-min's hot streak lives on.

Spurs lost their match against Liverpool 2-1 on Thursday at Anfield, Liverpool, dropping a spot in Premier League standing to second.

Liverpool got things started with an opener from Mohamed Salah, 26 minutes into the match. Spurs quickly caught up, as Son scored the equalizer in the 33rd minute, assisted by Giovani Lo Celso.


The first half finished tied at 1-1. After the break, both teams struggled to break the silence, and it wasn't until the 90th minute of the game that Liverpool finally found a crack in Spurs' defense. In the dying minutes of the game, Liverpool’s Roberto Firmino scored the winner to help his club to a 2-1 victory.

But while Spurs lost, Son's personal stats continue to improve. Wednesday's goal was Son's 11th of the season in the Premier League.

Spurs manager Jose Mourinho said after the game that his side's issue had been converting their chances.

“We had chances in the moment they were suffering,” Mourinho was quoted as saying on Spurs' website. “Of course, I know it’s a word people love, possession, but for me it’s not [about] possession. It’s what you do when you have the ball, how dangerous you are when you have the ball, and in the second half, we got in the face of the goalkeeper two or three times, and we have to score to win the game, period. There is no story. Score the goal, three points, go home and no more talk.”

As Liverpool and Tottenham fight over the top of the table, Wednesday's loss pushed Spurs down a spot to second in the standing as the Anfield side took first. Spurs now have a record of seven wins, four draws and two losses, totaling 25 points.

“I’m disappointed because we deserved much more, but that’s the way it is,” Mourinho was quoted as saying.

Liverpool, on the other hand, now sit at the top of the standing three points ahead of Spurs, with 28 points after 13 matches.

Although Spurs lost the match and lost the top spot in the regular season standing, Son drew one goal closer to his personal Spurs century. With Wednesday's goal, Son has now scored 99 times for the London club.

Son joined Spurs back in the 2015-16 season, after years of playing in the German Bundesliga. During his first season, Son only scored eight goals but he made a significant improvement in his second season, during the 2016-17 season, with 21 goals for Spurs.

Ever since that second year, Son has managed to score double-digit goals every season. This season is already set to be his best ever. With 13 Premier League matches played, Son has scored 11 league goals. Son's top season before this one was the 2016-17 season, when he scored 14 goals. His blistering start to this year's competition has him only three goals behind that record with five months left to play.


Including other tournaments Spurs are competing in, Son has already scored 14 goals this season.

Son's 11th Premier League goal on Wednesday also allowed his to once again tie for the lead in the Premier League’s goal standing this season.

Son is now tied for the league in goals scored along with Dominic Calvert-Lewin of Everton and Mohamed Salah of Liverpool.

As the goal this time was assisted by Lo Celso, it doesn't affect Son and teammate Harry Kane's quest to become the greatest goal-scoring duo the Premier League has ever seen,

Son’s performance so far this year has seen him pick up a number of accolades, including here in Korea, where he was again named the Korea Football Association (KFA) Player of the Year. This is the second straight season for Son to win the honor and throughout his career, this is the fifth time he has won the award. Son was named the KFA’s player of the year in 2013, 2014, 2017, 2019 and this year.

Internationally, Son is currently one of the finalists for FIFA’s Puskas Award, given to the player across all competitions around the world who scored the best goal of the year. Son was nominated for the award for his goal during Spurs’ match against Burnley back in December 2019. During the match, he dribbled the ball all the way down the pitch on his own before finding the back of the net.

Son will have a shot at scoring his 100th goal on Sunday, during Spurs’ Premier League match against fourth-ranked Leicester City at Tottenham Hotspur Stadium. The match will kick off at 11:15 p.m. on Sunday, Korea time.

Looking at Spurs’ schedule this month, they are given almost no break as they will be heading to Stoke-on-Trent, England after Sunday’s match to play the quarterfinal of the EFL Cup, known as the Carabao Cup, against Stoke City on Wednesday, Dec. 23.