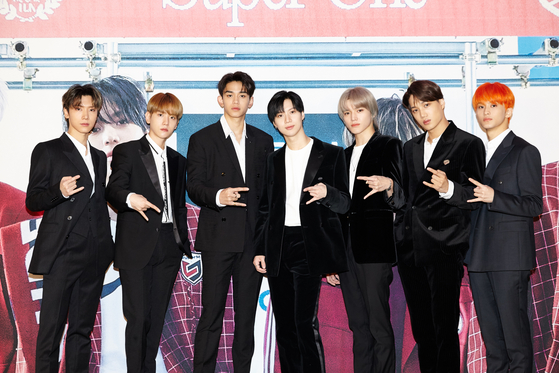 Boy band SuperM poses for photos prior to the online press conference held on Friday morning ahead of the release of its first full-length album "Super One." [SM ENTERTAINMENT]


A year after its debut, boy band SuperM is proud to bear the nickname K-pop Avengers and will even be releasing its very own Avengers comic book series in an official collaboration with Marvel Studios.

The group discussed the project as well as new album "Super One" in an online press conference immediately before the album drops on Friday afternoon.

“Super One” is the band’s first full-length album, following the release of the EP “SuperM ” when it debuted in October last year. A K-pop supergroup, SuperM brings together Taemin of SHINee, Kai and Baekhyun of Exo, Taeyong and Mark of NCT 127 and Lucas and Ten of WayV.

The creation of the group with members from existing bands came as a surprise at the time, although the debut EP quickly topped the Billboard 200 albums chart to prove that the concept worked. "SuperM" was the first debut record from an Asian group to top the Billboard 200, and also took the No. 1 spot on either other Billboard charts, including Artist 100 and Top Album Sales.

“We are a group with members that have all gone through different experiences and years of career,” said Taeyong. “And I believe that we are a coalition of different people who are able to show a different uniqueness as SuperM. There is chemistry and synergy within the members, and the fact that this new form of coalition was tried is innovative in itself. We promise to live up to the nickname K-pop Avengers with the best performances.” 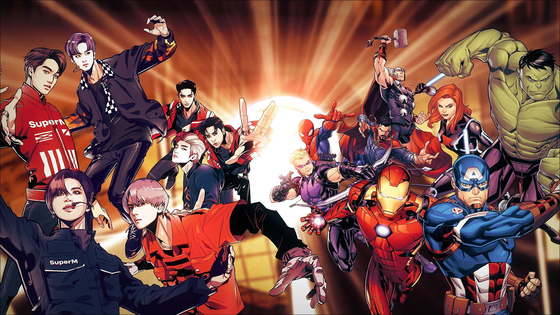 
The group received the K-pop Avengers moniker when they debuted, but now they've truly earned it with a collaboration with Marvel Studios, home to the non-K-pop Avengers. A new comic book featuring the SuperM members as the main characters will be available as official merchandise, which the members say makes them feel proud and honored.

“I always pictured us as the image of the real Avengers, ever since [producer] Lee Soo-man introduced us as the K-pop Avengers upon our debut,” said Mark. “I am honored as a member of SuperM and also as an individual to be able to collaborate.”

The 15-track album “Super One" includes the pre-released singles “Tiger Inside” and “100,” as well as the lead track “One,” which was also released earlier this week. While the members described the album as a chance for people to learn the new synergy and harmony the members have developed over the last year, the lead track “One” is actually symbolic of the merging of existing band members to form a new group, according to Swedish producer duo Moonshine. 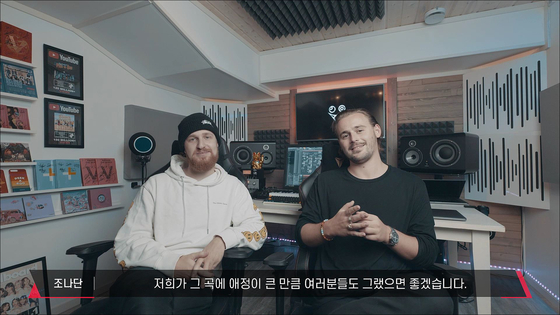 
The duo, consisting of songwriters Ludwig and Jonathan, took part in SM Entertainment’s online song camp, through which they produced the tracks “Monster” and “Infinity.” After listening to the songs, they were asked by Lee to combine the songs together to create one — just like the members of SuperM were combined from different groups.

“We couldn’t layer the two songs with each other at first,” said Jonathan. “The transition was the hardest part, especially from the prechorus to the chorus. It took at a lot of works and a lot of versions of the song. We tried to make the blend as smooth as possible.”

“At last, we were able to come up with a song that we were happy with and SM Entertainment was happy with," said Ludwig. "We are very proud of it and it may be one of the greatest songs we’ve ever written.”

This isn’t the first time SM Entertainment has created a hit by combining two completely different songs. SHINee’s 2014 hit “Sherlock” was created from the songs “Clue” and “Note.” Having already performed a song that was made up of two songs, Taemin urged listeners to listen to the two separate songs “Monster” and “Infinity” — which will be included on the album — after listening to “One,” to find the similarities and differences and enjoy the listening experience to the fullest. 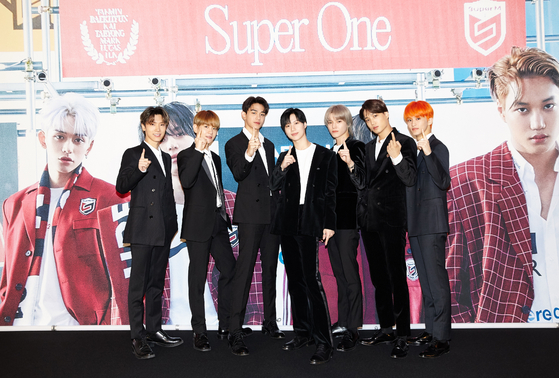 Boy band SuperM poses for photos prior to the online press conference held on Friday morning for the release of its first full-length album "Super One." [SM ENTERTAINMENT]


“The two songs are very unique on their own,” said Taemin. “So they come together in a peculiar way that it seems like they don’t belong together, but they do at the same time. The synergy is very unique and it will be fun to listen to the songs separately to compare them.”

Earlier this year, SuperM became the first ever K-pop group to hold a paid online concert, kicking off a series of online concerts under the “Beyond LIVE” brand in April. The concert opened up the possibility that people around the world could enjoy music together at the same time, in the safety of their own homes but still connected to each other and the artists through the digital platform.

“We talked with the fans through video chats and felt like we were being cheered on through the individual videos of fans around the world,” Baekhyun said. “I thought face-to-face communication would be the only way people could interact, but it felt so good to be able to see fans from all around the world online and even get to see fans that we wouldn’t have. But I do hope that things will get better and we get to see everyone in person on stage.”

He added, “If we get to cheer people up even just a little with our music, then we will be content. I hope everyone will remember the messages of positivity.”