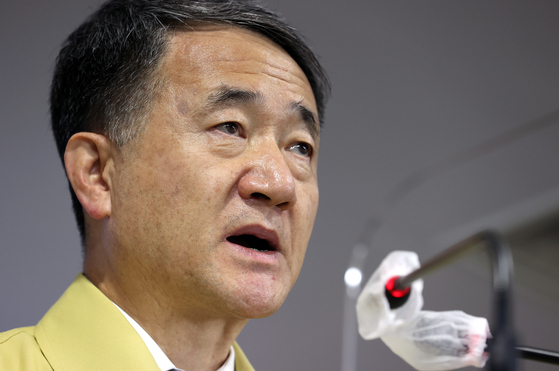 In a Friday press briefing held at the Central Government Complex in Gwanghwamun, central Seoul, Minister of Health and Welfare Park Neung-hoo announces measures to be imposed nationwide during the so-called Special Prevention Period from Sept. 28 to Oct. 11 in time for the Chuseok holidays. [YONHAP]

The entire country will be subject to many of the same restrictions as the Level 2 social distancing system from Sept. 28 to Oct. 11, central health authorities announced Friday.

But there are a few changes.

Public institutes such as museums and libraries, which were closed under Level 2 of the three-tier social distancing system, will reopen nationwide, though a limited number of people will be allowed to enter at a time.

In the greater Seoul area, the aforementioned places plus several other types of "high-risk businesses" — where people have higher risks of contracting the coronavirus due to their crowded environments — will remain shut until Oct. 11. They include noraebang (singing rooms), buffets and indoor fitness centers involving “intense” group exercises.

Eating in internet cafes will be allowed again nationwide, though minors still aren't allowed to use the facilities.

The other restrictions imposed nationwide until Oct. 11 are practically the same as those in the Level 2 social distancing system.

Central health authorities have declared a so-called Special Prevention Period from Sept. 28 to Oct. 11 as they brace for the Chuseok holidays, set to kick off next Wednesday. Concerned that people may spread the virus to their relatives and loved ones, officials have warned the public not to leave their homes this year, especially given the recent rise in daily coronavirus cases.

Korea added 114 new cases Thursday, the Korea Disease Control and Prevention Agency (KDCA) announced Friday morning, down from 125 the day before. It was the third day in a row that daily cases were in the triple-digits.